A year ago, I contacted an old friend from my RAF days who had moved to Haute Garonne in the Pyrenees, rebuilt an old farmhouse and adjoining porcherie which he had turned into a modern gite, which was available for hire. Pete advertised the property on Facebook, and after consultation with Fran, we decided to go for it.

The logistics of getting there were addressed much later, and not realising just how far it is, decided in the end to drive down, spending a few days before and five days after the week stay in the gite getting there and back, making it a full two week tour. So in February I booked the Eurotunnel crossing; my choice of getting across the channel for its ease of travel, value and sheer convenience. The return trip cost £130 which equated very well with other forms of cross-channel travel. The final payment made in early June, preparations had to made to our 13 year old Renault to equip it for the arduous journey. So in it went for a service and to change the cam belt, as the existing one had been fitted some five years before, and couldn’t be completely trusted. The cost of £300 was well worth it, considering the problems that could be caused if the damn thing broke; worse scenario is a new engine. The other things that had to be arranged all fell into place: travel insurance, breakdown insurance, the obligatory equipment required by French law: fluorescent jackets, first aid kit, headlamp beam deflectors, fire extinguisher and controversially, a breathalyser. This last because most French drivers don’t carry one as a form of protest, since they can languish in the car for years and get too warm, negating their effectiveness, go past their use by date, and allegedly, were introduced by Pres. Sarkozy and one of his close relatives was the sole manufacturer/supplier. This last point alone was enough to make French drivers protest against carrying on the things.

So the Eurotunnel beckoned, and it was the day to leave, 3rd July. An uneventful journey down to M20 to the terminal, offered an early train, which was accepted, and then 30 minutes or so later we were driving on the right side of the road. We stopped very soon after at an ‘Aire’ or rest area. We had a view over Deux Caps and could still see England. We bought loads of cold food to have on the way, and had some early lunch at this Aire. The sun shine and it was very hot: and we had 600 miles to go. The essential pint to regard though that it is not cheap to get anywhere fast in France; there are some five major companies operating the main route peage roads and if you want to use them the costs vary between companies. Our first stopover was Le Mans and we had booked ahead to stay the night in the Premiere Classe motel in the university area. A typical French chain of motels, they all provide basic, clean accommodation, often with breakfast bars and free WiFi. Coincidentally there was a classic car rally at Le Mans that weekend so our travelling companions were classic British cars from all eras. A lot if them stayed in the same hotel so it appeared we were somewhere in England. The next morning we headed off down the Autoroute again to our next stop Cahors, some 350 miles away. 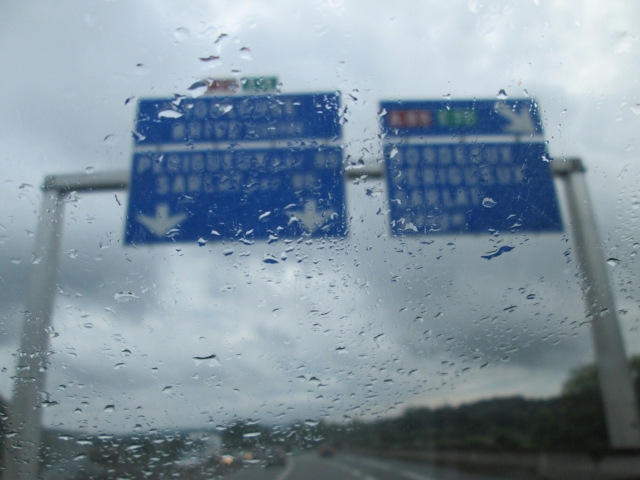 Although there was some rain, which improved as we got nearer our destination: 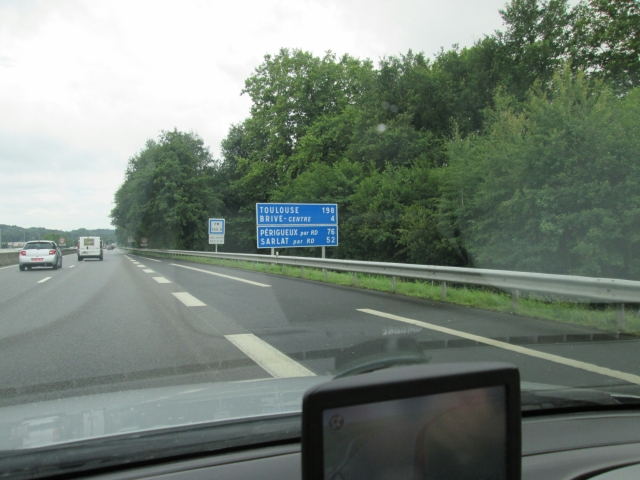 The good/bad thing about French motorways is that mostly they are well maintained and fast, although we kept between 65-70mph as if felt most comfortable and returned the best fuel consumption. We stopped a couple of times, using our own food and brewing up with the small gas cooker and kettle we took with us, and the journey was quite uneventful. The previous work done to the car was paying dividends as it purred along like a good ‘un. Fran had the worse shift with rain, major hills, aggressive French driving and me nodding off, Mr satnav, good old Tom-Tom got us to the Camponile hotel in Cahors. We were dog tired so opted for some dinner in the hotel. Which turned out to be quite nice, we had a short walk around the somewhat industrial area around the hotel, but didn’t explore too much. I tried in the morning to get a French electrical plug for our 4 way adapter without success, but gave up, we packed up and set off again, this time via Toulouse towards Boulogne – sur – Gesse, a mere 145 miles away. The marvellous thing about the distance signage in Europe is that its all in kilometres and they tend to pass a lot quicker than miles.

So we set out for our final destination, Pete and Wendy’s gite near Boulogne-sur-Gesse in the Midi Pyrenees about 50 miles from the Spanish border. The gite: 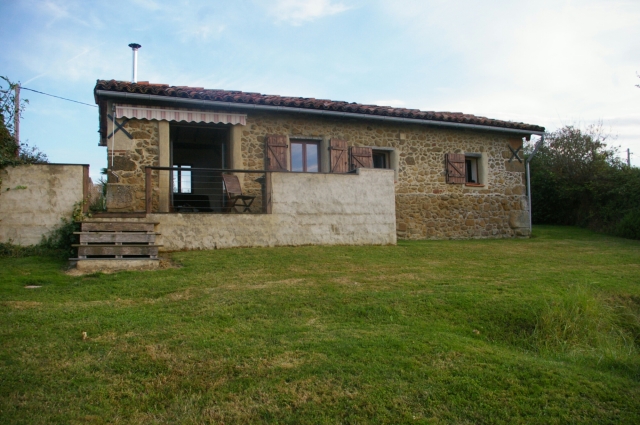 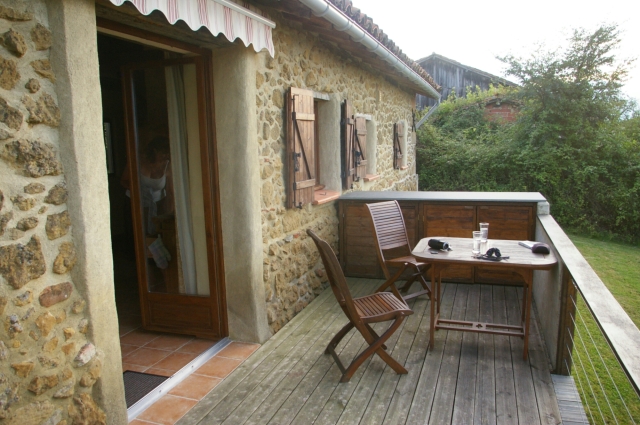 Has a living, dining room, a bathroom and a bedroom. Pete’s website shows off the interior much better: The Gite

The first evening was lovely, Pete and Wendy invited us over to their patio (20 feet away) for a drink and to catch up. Pete and I served together on the same support helicopter squadron (72) in the 80s in Northern Ireland at the height of the troubles. We had a bit of catching up to do after all that time, all aided by a beer or three! We had frozen two meals and took them with us, so that was the first night sorted out. The next day Sunday, it rained mostly although it was a good day to relax after our long arduous journey. It was aided by the fact that Pete had installed a satellite dish the size if Jodrell Bank to pull in all the UK stations so we were able to watch the Wimbledon final, even though the Scots guy wasn’t in it. The next day the rain had eased so we went into the local town Boulogne-sur-Gesse to have a look around, but in common with many French towns between 12 and 2 it was closed, literally, although we found a cafe open, and the big supermarket chain, Intermarche. The afternoon turned out quite nice so we chilled out on the balcony, and I had go in the swimming pool (see The Gite), but that was folly, it was 20°, which for swimming in is cold, believe me.

Tuesday loomed and we decided to go out for a drive, and got as far as St Girons via St Gaudens: 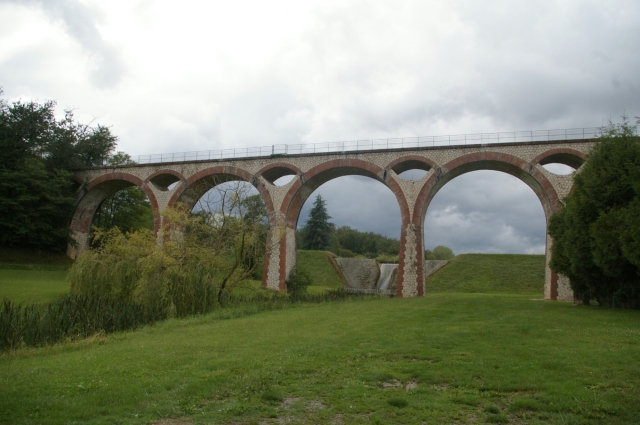 But as can be seen in the photo, it was overcast. We stayed out until the mid afternoon, having seen the Pyrenees from afar: 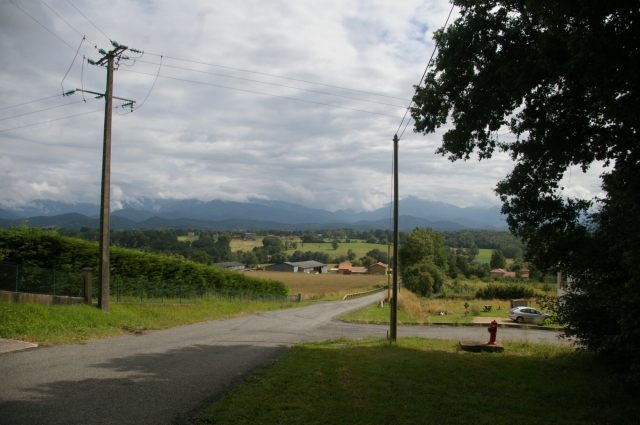 We were waiting for a nice day to go to them, so on Wednesday we went back into B-s-G because it was market day. The quality, range and prices in a French village market are beyond compare, we picked up some lovely local cheese, olives, garlic and meat from a British stall holder selling locally produced English cuts if sausages, ribs, bacon etc. Having bought some stuff we went back to the gite, and spent the afternoon there, looking through the local attractions leaflets which Pete and Wendy thoughtfully leave in a folder. We decided to go to the Pic du Midi, which is high up in the Pyrenees. The journey was about 60 miles away and involved some of the route of the Tour de France, leading up to the notorious Col de Tourmalet, right at the top, nearly 3000 metres or 10000 feet, where several cyclists have died struggling to get to the top. The car got very hot going up but got there in the end, smelling a bit if rubber which seemed alarming until other much newer cars went past smelling the same: 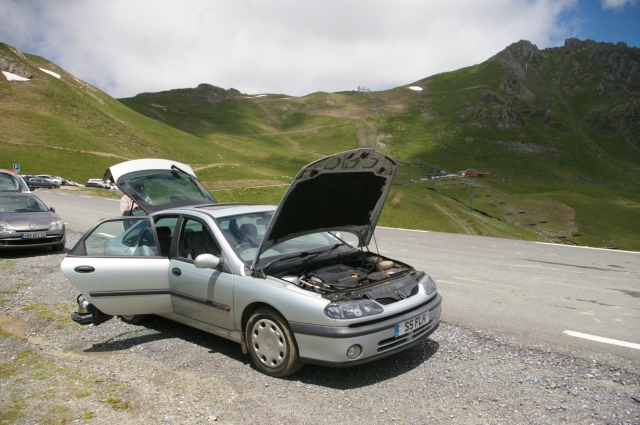 So we had a brew and some lunch and climbed around the Cop and looked over the fantastic sights: 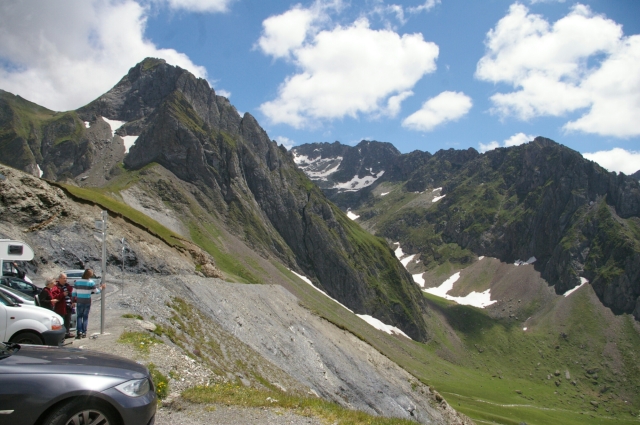 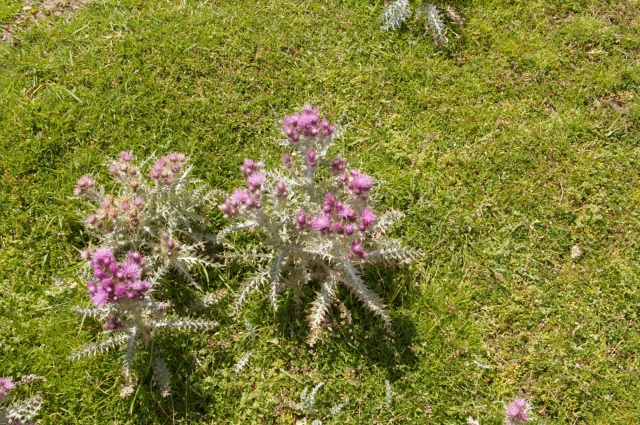 The souvenir shop relieved of us some money and we made our way back to the small town of Mongie which is a ski resort and home of the cable car which goes up to the Pic du Midi: 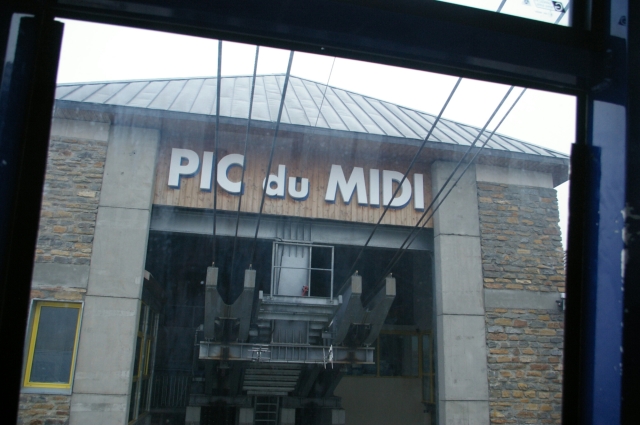 This started 100 years ago as a metreological station, but has grown over the years to become a research station, observatory, hotel and tourist attraction. Two cable rides taken you to the top, some 3500 metres up: 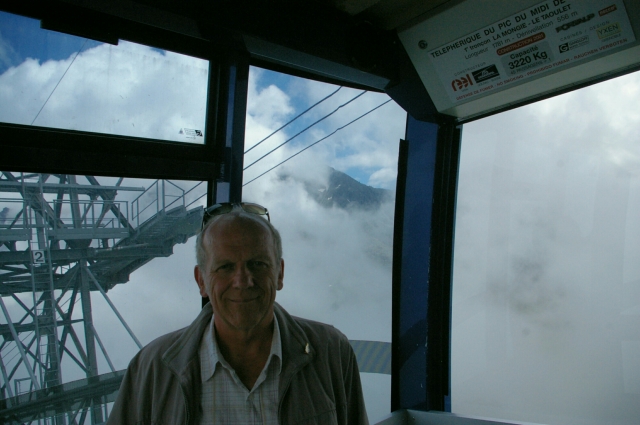 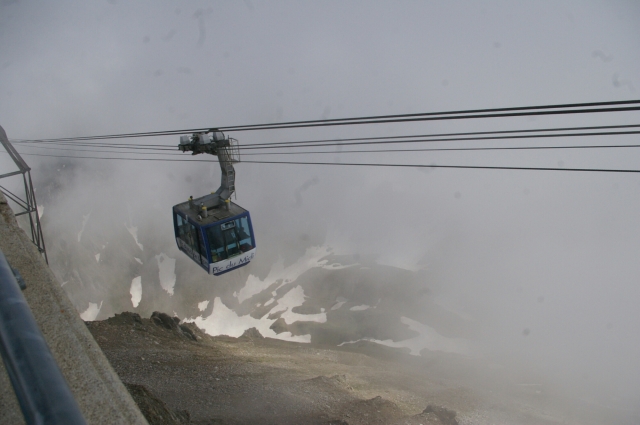 To be fair, there isn’t a lot there for tourists, except of course the fabulous views, but I suppose you don’t need much else. There is a museum, restaurant/coffee bar but if its a nice day (it was for us), you get breathtaking views which photos can’t do justice to: 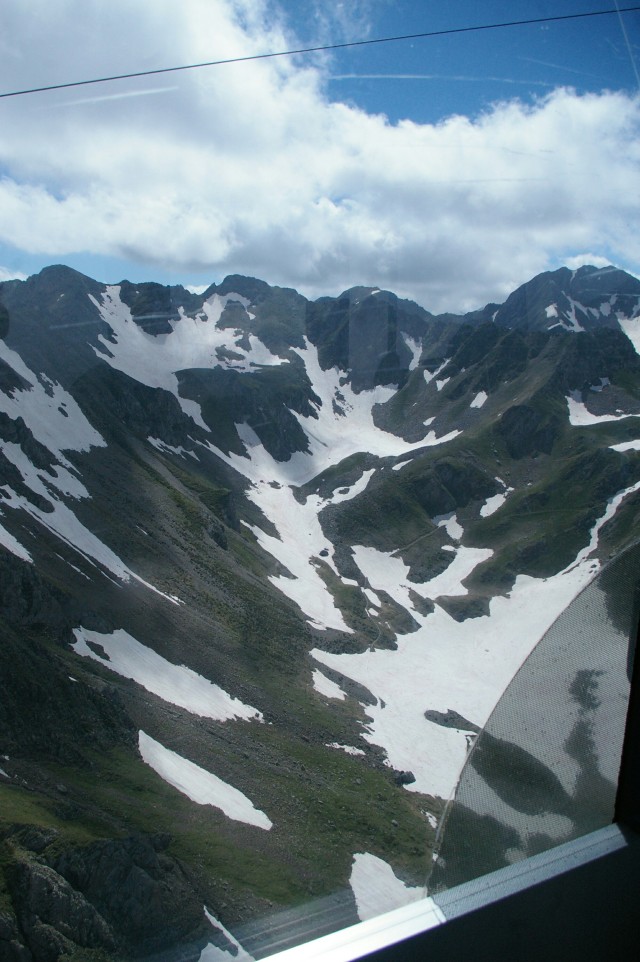 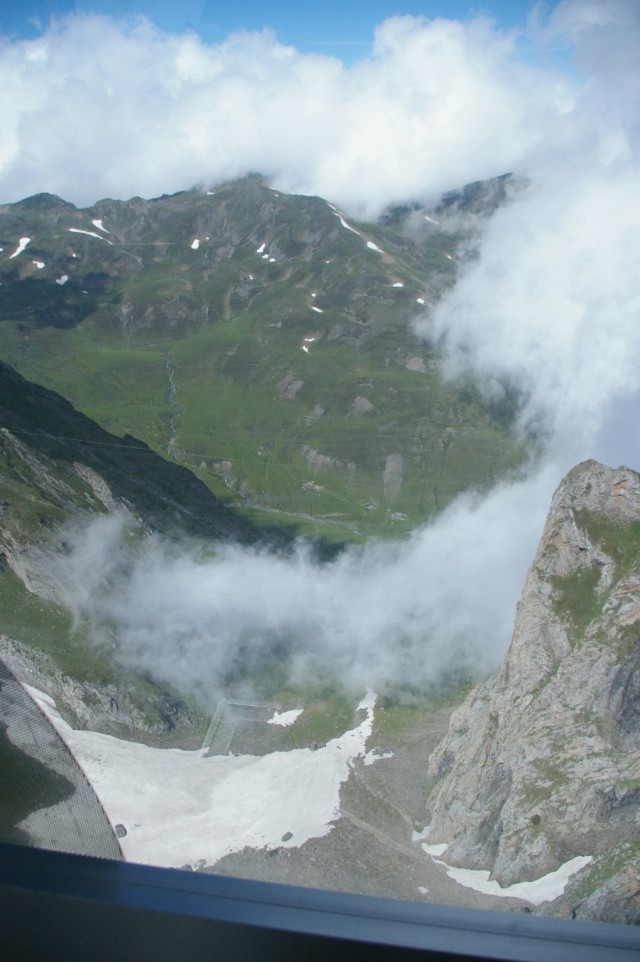 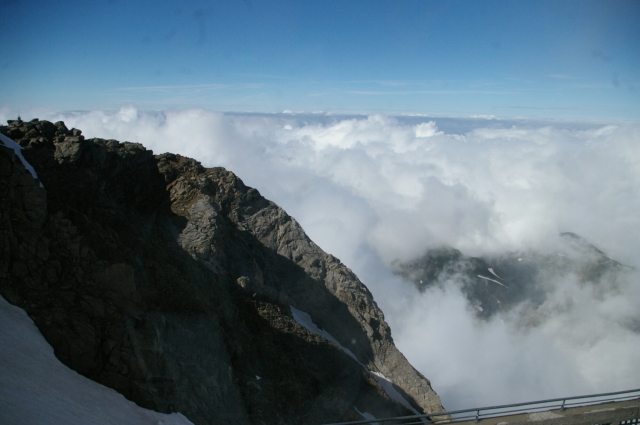 So we caught the cable cars down, just as the clouds descended and strouded the whole area, including Mongie in fog. We set off back down the hill in the fog, and broke into sunshine a little way down. On the way was this waterfall: 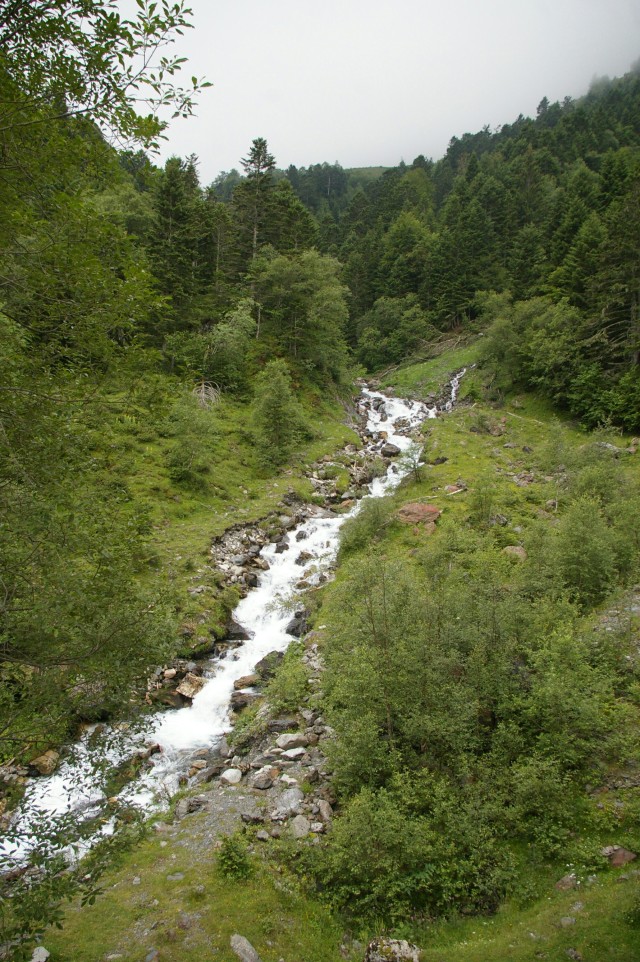 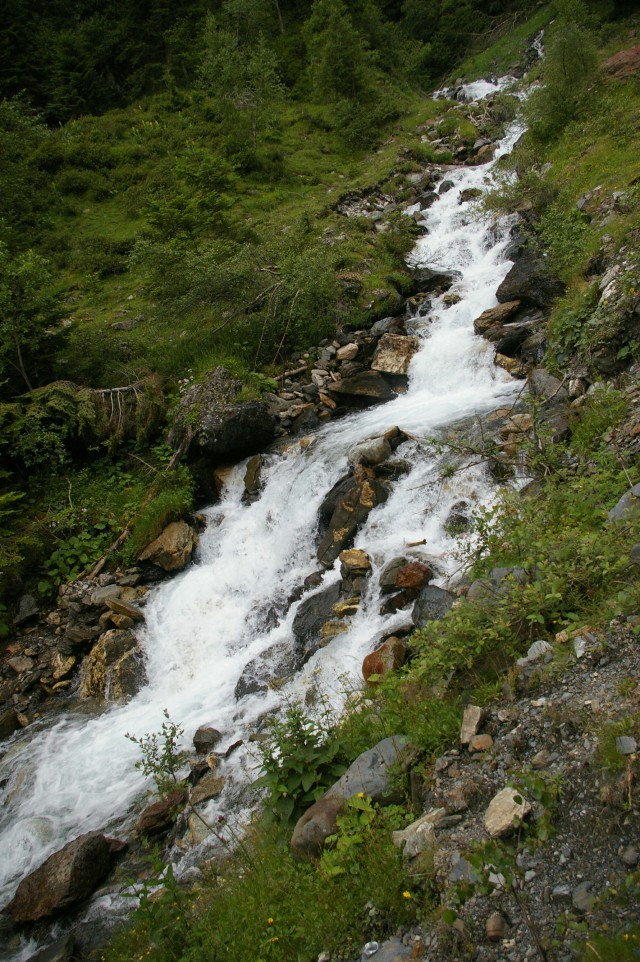 …which was very fast flowing. We made our way back to the Gite, which took about an hour and a half, arriving back about 7.30, totally shattered. To be continued…

Retired aerospace engineer, first with the Royal Air Force and then BAE Systems. Now enjoying a variety of activities and not getting bored. I was a Games Maker Volunteer at the London 2012 Olympics and a volunteer at the Rugby World Cup 2015 in England. I was also a volunteer at the 2019 Cricket World Cup in Southampton. I intend to blog about what interests me.
View all posts by cliverh →
This entry was posted in My World and As I See It and tagged Boulogne-sur-Gesse, Dordogne, Haute Garonne, holiday, Loire, Lot Valley, route peage. Bookmark the permalink.