This music festival has been running annually for six years, and takes place in the beautiful grounds of Boar’s Bridge House near Basingstoke in Hampshire. ‘Music Festival’ may conjure up images of pyramid tents, mud, alternative therapy stalls and loud, very loud music. Well this one is a lot less frenetic than that. Although there is amplification and a ‘main stage’, there are alternative therapies, side stalls and an acoustic tent, so there are parallels with other, more famous festivals.

The basic form of music is ‘folk’, although images of be-beaded, sandalled pre-hippies with one finger stuck in the ear, wailing in a plaintive voice about bad things happening is very far from the reality. Folk can encompass many forms and volumes from the quiet introspective to the frankly raucous and quite ‘rocky’ but in the case of this festival, includes pure folk, pseudo classical, bluegrass, pop, rock, blues, Motown; basically you name it, it’s there. My wife Fran and I arrived on Friday evening 20th June, and after a few hellos to people I know, including the organiser Lynne, we set up our camp and the lovely flat field provided for that purpose. Quite a few of the attendees come from two folk/acoustic clubs: The Windmill, which meets weekly at the Tweseldown pub in Aldershot, and Poppies which meets in Yateley monthly on a Friday. Lynne and Mike who organise Boars Bridge have been doing so improving it year on year and praying for decent weather which they got this year for the first time since 2011. It was hot and sunny, and the sales of the local beer in the ‘other’ marquee were very high. Food was also available, kept simply to burgers and chilli, both meat and veggie. We put up our ‘tent’ which attaches to my van, a Mazda Bongo:

This makes for a very comfortable setup and enables us to detach the van and drive away, although we didn’t do that on this occasion. The ‘main stage’ isn’t however a pyramid, just a humble marquee: 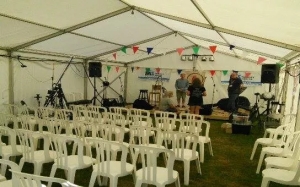 …which had enough room for everyone to sit down and enjoy the performances, spread over the Saturday and Sunday.

…contained the comprehensive running order from the likes of Stuart Tester, a favourite at the Tweseldown, to The Stomping Nomads, an almost rock-like band, through Gary Paine’s Blossom Hill Bluegrass band, which includes his dad Don, who is 80, to our hosts who played in their group Tudor Lodge, made up of Lynne and John Cee Stannard. There were 30 acts, including Serpentyne a morris dancing group, who roped in innocent bystanders to perform through to some excellent performers including Jim McClean, No Small Thing and Steve Donnelly. There are far too many others for them all to get a mention, but needless to say all were professional, consummate musicians and singers who really knew how to put on show. These included: Bram Taylor who’s been a professional, touring musician for over 40 years, Terry St Clair, who is also not in the first flush of youth, and Mike Silver who produced an excellent set.

In the ‘other marquee’, Mike Hayller (Krabbers) and his beau Caroline set up a Buskers ‘no mic’ Corner, where anyone with an instrument, a voice and/or a song could wait their turn and do a set, usually two numbers or if no one was waiting, a few more. This was mainly for those ‘folkies’ who didn’t aspire to the main stage, and who normally performed as a floor act in one of the clubs. Mike and Caroline organised it superbly, in fact some of the main acts came through and took their turn, whether to warm up, or just to entertain a smaller audience we’ll never know. At one point on the Sunday there seemed to be more performers than there were on the main stage, but because that was amplified it could always drown out the buskers. It was great fun and again a wide range of material, played on guitar, banjo, ukelele, fiddle, mandolin, recorder (the wooden kind!), cajon, squeeze box, and most quirkily of all, a hurdy-gurdy! An absolutely brilliant idea which worked well. Hats off to Mike and Caroline. 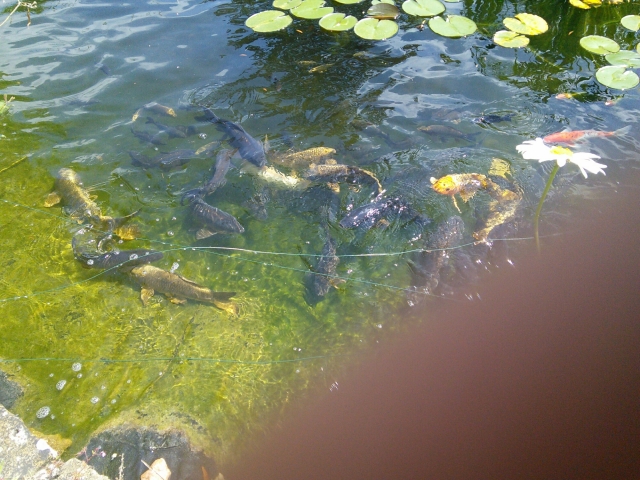 …lovely scenery, well kept grounds, horses, wildlife, carp pond, everything for a relaxing time, and everyone played the game and took their rubbish home. There also seemed to be a lot of day visitors too, judging by how full the car park was and some of the eclectic vehicles in it:

…it’s based on Sierra running gear and a Toyota engine apparently and is yours, a snip at £25000; bargain! The whole point of the weekend was to raise funds for the Berkshire MS charity and it seemed we bettered last years figures, we’ll know soon. The whole event finished with a grand finale in the main tent with about 20 performers on stage from the previous two days. It was a riot, and sent us off on the journey home in high spirits. Everyone who was involved in the planning, execution and partaking of the whole event should be heartily congratulated on a job well done to an extremely high standard.

Retired aerospace engineer, first with the Royal Air Force and then BAE Systems. Now enjoying a variety of activities and not getting bored. I was a Games Maker Volunteer at the London 2012 Olympics and a volunteer at the Rugby World Cup 2015 in England. I was also a volunteer at the 2019 Cricket World Cup in Southampton. I intend to blog about what interests me.
View all posts by cliverh →
This entry was posted in My World and As I See It and tagged acoustic music, Boar's Bridge Festival, folk music, Poppies, Windmill Club. Bookmark the permalink.