The Westland Wessex was a military helicopter that was in service with predominantly the Royal Air Force (RAF) and the Royal Navy but was also operated by many other countries, latterly Uruguay, which operated ex-RAF aircraft until four years ago. It was used in the troop transport role and was the workhorse helio for the British armed forces for close on fifty years. 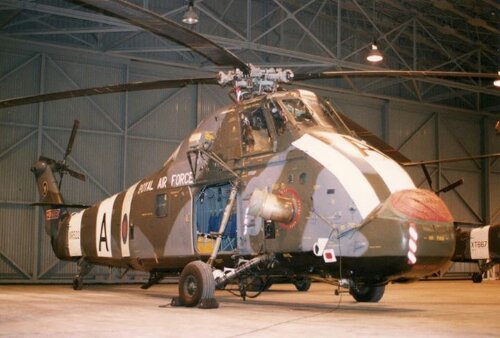 More of the history of the Wessex can be found here:

A Facebook group has been formed called Wessex Helicopter Restoration. Although the title may be self-explanatary the objects of the group are starkly simple: to obtain a Wessex airframe and get it airworthy with the ability to display it as a heritage aircraft. Much like the Vulcan the Wessex was British engineering at its best. Although it was copied from the Sikorsky S-58, it was actually a completely different aircraft developed by Westlands in the 50’s, and represented the best helicopter of its type well into the 21st Century. But, it was always an unsung hero, not as well known as the Vulcan but still a vital element in the defence of the country, particularly during ‘The Troubles’ in Ireland. So back to the object of the exercise: we’re looking for helpers, sponsors, supporters, sponsors, people who want to donate, anyone who is interested in getting a venerable old girl into the air again. Yes there are seemingly insurmountable obstacles and dead ends. In no particular order these include: funding, airworthiness approvals, a suitable airframe, storage, workshops, a restoration base area, volunteers; although to be fair we have a plethora of experienced Wessex engineers, pilots and other associated people, unless there are others interested. What we need most of all is enthusiasm, commitment and time. We feel the end result us achievable, after all it took years to get the Vulcan flying, but on their other hand it took a mere 24 months to get the recent Canberra PR9 airborne, which is a fantastic achievement. The will is there, all it needs is cash, and authority. I believe it’s possible.

Retired aerospace engineer, first with the Royal Air Force and then BAE Systems. Now enjoying a variety of activities and not getting bored. I was a Games Maker Volunteer at the London 2012 Olympics and a volunteer at the Rugby World Cup 2015 in England. I was also a volunteer at the 2019 Cricket World Cup in Southampton. I intend to blog about what interests me.
View all posts by cliverh →
This entry was posted in My World and As I See It and tagged helicopter, heritage, vintage aircraft, Wessex, Westlands. Bookmark the permalink.

2 Responses to The Westland Wessex