So Top Gear, what’s it all about? For the overseas readers, Top Gear (TG) is a British television programme ostensibly about cars, vehicles, transport and so on. A consumer programme it ain’t. There ARE some consumer driven pieces in it, but I’ll explain these later. Here’s me standing by the famous logo: 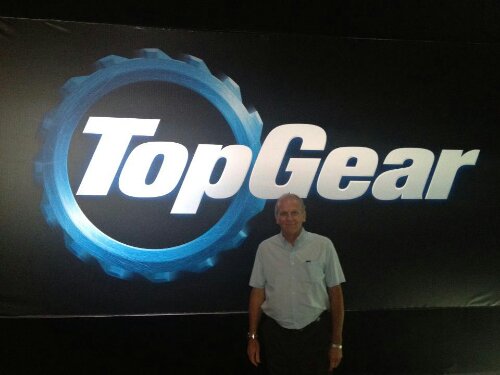 There was all sorts of vehicles in the hangar in Dunsfold in Surrey where the show is recorded. This is my daughter Charlotte standing by the Lamborghini, which was lovely and smelt heavily of leather; loads of cows must have shed their skin for this car. There was also the brand new London bus driven by James May, and a few of the ‘projects’ from previous series.

But I digress, what is it about this show that divides opinion so much but is also consistently voted one of the BBC’s top programmes? A friend of Charlotte’s works next door to where the show is recorded, and gets (free) tickets for friends and family. So because no-one else wanted them, she invited me to accompany her to watch TG being recorded. Luckily it’s quite near to where we live, but some people have driven the length of the country to get there. There’s a lot of standing about; for at least 4 hours, so it gets to your legs. The layout is pretty much as you see it on TV, but for each setup, the crew have to move the audience of about 1000 people so that they stand around the presenters next item. Its a bit like herding cats, but they get there in the end. The recording proceeds more or less in the order it appears in the final transmission: we see the inserts as they go along with Clarkson and co presumably slipping out for a ciggie. They use no Autocue, and rehearse the show in the morning. They’ve been doing it for so long, they have got it down pat. Clarkson is obviously the lead, but the other two Richard Hammond and James May are excellent foils.

The set-ups apart, the whole thing is run efficiently, and is recorded before 6 pm. I shall await with interest if my banter about parking on double yellow lines for short periods is kept in, but I doubt it. One of the most popular segments is the ‘Star in a Reasonably Priced Car’. This week it was Mark Webber, the Red Bull F1 driver who has recently announced he is departing the team. Clarkson’s interview with him lasted about 15 minutes, but this will probably be cut down to 5. Likewise the ‘News’ segment was recorded for over 20 minutes but will presumably be cut down. There was lots of swearing, off camera, and this was highlighted by ‘Outtakes’ tape they showed us, much of which was not broadcast able or even repeatable here.

The consumer segments, which in more traditional motoring programmes would include for example, everyday family cars, does not happen on TG. For instance, in this programme, Clarkson drives a Jaguar F type, about £80K, Hammond drives the new Range Rover which ‘starts’ at £50,000, and James May drives the ‘NBFL’, which stands for new bus for London; a snip at £300,000. BUT, it is totally produced in Britain, and this led on to the final segment which showed what is actually made in Britain, and the result seen on the screen is surprising. This was a breakaway from their usual jokey ending, possibly because it was the last one in the series; until next year. It just shows to go that the three presenters are serious journalists and well done to them for being so. Yes TG is more of a comedy show, than say the Channel 5 equivalent: fifth gear, which is a more serious consumer programme and gives appraisals of genuine family type cars. TG doesn’t even try to do this, but in its jokey manner can make serious comments about motoring in particular and life in general. Yes it has its detractors, but being the biggest money earner in the BBC’s inventory, I doubt if there’s any plans to shelve it soon. Clarkson joked that the only country in the world that doesn’t broadcast the show is France; I wonder why? Of course it’s really Jeremy Clarkson’s show, with the other two providing the foil to his sharp wit and acerbic comments, but it’s none the poorer for that.

So after 5 hours on our feet, we were glad to sit down in the car and get home. Two of the presenters were off to Venice that night, so it takes stamina to do that job. Me? I’ll settle down on Sunday night and try and catch my appearances on the show. I doubt they’ll be many.