Its one of those weekends which is so well organised and advertised you wonder why the idea isn’t taken up elsewhere. This is the third weekend we have been to the Broadstairs Blues Bash (BBB) which is held annually in February in Broadstairs in Kent, a quaint seaside town adjacent to it’s larger neighbour Ramsgate. Famously the home for a time of Charles Dickens (he wrote Bleak House in where else but Bleak House), and part of Nicolas Nickleby in a town-centre hotel. Broadstairs was also the home of former Prime Minister Sir Edward Heath, for which he was the town’s MP for many years.

The BBB is an unusual festival, featuring mainly all forms of blues music, because it’s not held in one venue over a couple of days, but has eleven pub venues spread over a whole weekend. A programme is produced which includes a matrix of all the venues cross-referenced to the acts. The publican pays the artist whether an afternoon or evening session, and hopefully fills the pub (not difficult) to raise enough funds. On the Friday night we saw a band in the Balmoral, overlooking the seafront, and the landlord told me he needed to make £700 that night to cover his costs. I don’t think there was any danger he wouldn’t, the place was jam packed, as was just about every venue we tried. The reason the BBB was started was to increase tourism in the close season, but I doubt Nigel and Dave who got it going thought about that, they just wanted a weekend of good music. Broadstairs also holds various other music festivals through the year. The BBB though is strictly (almost) the Blues, in its many forms, Delta, Deep South, traditional, modern. The Blues is the basis of just about every form of modern pop or rock music, especially the form 12 Bar, which has four bars each of chords separated by intervals of 4 full tones and 1 full tone, so the classic form would E, A, B or G, C, D. Indeed any key can be played so long as the form is kept, and this makes it 12 bar. The Rolling Stones and Led Zeppelin were early exponents of the form, so was Elvis Presley when he was a rocker.

Back to the BBB, it is a fantastically organised event Broadstairs Blues Bash by Nigel Fiest and his team and they have the whole event off to a fine art. Thanks to them. The afternoon sessions were very good, we saw excellent and professional bands between 1pm and 4pm, culminating on the Sunday afternoon in the Pavilion, when it was an open mike with a base band and musicians volunteering from the floor to perform, either alone or with backing. Yes, its done elsewhere to great effect, but here amateurs from the floor were being backed by professional musicians in some cases, and the effect was tremendous, if not always perfect, but hey that’s the nature of the gig so to speak. The organisers also cleverly created a ‘tube map’ of the venues: 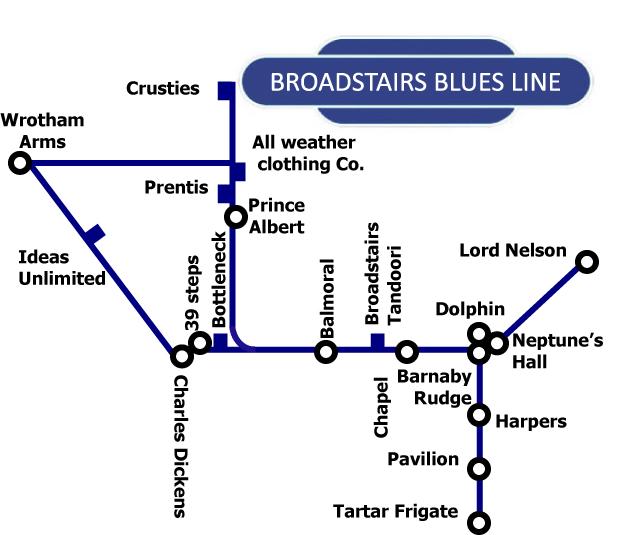 …so even if you had never been to Broadsairs, although not a huge town, it was easy to find where each band was playing. Broastairs is a delightful town, wasn’t subject to huge disruption due to the recent storms, and in the summer season has something for everyone. I suggest, if you like ‘The Blues’, to look out for the BBB next year, it will be in its usual place at the end of February.

2 Responses to The Broadstairs Blues Bash