Let it not be said that table tennis, or wiff-waff as Boris Johnson calls it, is boring or slow. It is one of the quickest sports in the world with the ball taking just half a second to go from one side of the table to the other.  It’s good as a spectator sport as well, because you can see the ball, and the way it whizzes around the playing area.  Incidentally, wiff-waff was the term used by Victorians who invented the game and used to play it on the dining table with a ball made of cork.  So Boris wasn’t that wrong as it turns out.

My second shift was due to start at 06:45 so it was the 05:14 train from Guildford this morning. Gulp, that took some effort to get up and get to the station at four thirty am. The same trouble the night before, getting to sleep knowing you are getting up that early stops blissful slumber from creeping in. But the journey went smoothly, this time I went to right station and got off at Custom House for the Excel, through security and off to the briefing to see what my job was for the day, and it was a plum!  I was in the team showing people to their seats in the Table Tennis competition and generally assisting with getting the public sorted out and settled for the games of which there are four being played simultaneously.

The gates open, the public pour in and the session, which lasts four hours, gets under way. The Playing Arena holds about 10,000 people but we are allocated a small section to look after with other teams doing their area.  There are four games going on, all at the same time, and the one between the People’s Republic of Korea (North Korea) and the Republic of Korea (South Korea) was a real needle match with the Korean man winning (sorry don’t know the actual result!). At least the flags shown for each country were correct.  The British chap lost to the German (sounds familiar) and the climax of the morning session was the match between the Japanese guy and the Greek guy, the only match left still playing, with it going to 3 games all and the deciding  game fought hard, eventually the Japanese guy being the victor.  The crowd were cheering the underdog at any time and it was a fantastic atmosphere.  The crowds were big as well. The morning session started at 10.00am and it got pretty full, of course most were there to watch the Brit chap and some left after his match. 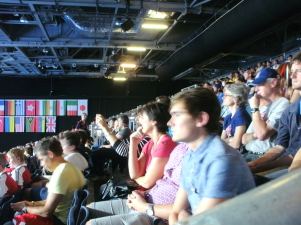 The feeling of bonhomie and feeling that you are doing something useful is still there only more so. In contrast to yesterday when not a lot went on, today was exciting and interesting and was what I really wanted to take part in the Olympics for.  The kindred spirit between all the volunteer games-makers is palpable and we greet each other with a knowing  nod or other acknowledgement when we are travelling in to or away from the venue.  And talk, that is one thing we are all good at and probably why we were the 70,000 chosen out of the 250,000 who applied. The reasons for applying are many and varied. In my case it was just to take part, but most of the small team I was in today are either waiting to go to university or are in various stages of their course, including graduation, and their reasons for taking part are as diverse. Some want to put something ‘interesting’ on their CV, or to gain the experience of working with people. Some are on gap year and wanted to fill a part of that in, and some just wanted to ‘do it’.  Whatever the reason, all the volunteers are doing it for the love of wanting to do something for the country without and that is no bad thing, especially when you read about the greed of certain sections of society.

I hope this blog is being read, I would love some comments back via the comments section, when it is viewed.  Tomorrow is judo and again I don’t know what I’ll be doing, but I’m sure it will show another facet of this fascinating experience.

Retired aerospace engineer, first with the Royal Air Force and then BAE Systems. Now enjoying a variety of activities and not getting bored. I was a Games Maker Volunteer at the London 2012 Olympics and a volunteer at the Rugby World Cup 2015 in England. I was also a volunteer at the 2019 Cricket World Cup in Southampton. I intend to blog about what interests me.
View all posts by cliverh →
This entry was posted in Olympics. Bookmark the permalink.