I’m staying true to my word to capture my thoughts and experiences at the Olympics daily. So here goes with my first day of action (or not!)

They say the best things come in small packages; this must be true of weightlifters, who I had never seen any close up before. On TV in previous Olympics they all looked like man-mountains, barely able to stop their legs rubbing together. Seeing them ‘in the flesh’ is a different matter altogether. many of the lighter ones (<56 Kg) are small wiry types who can lift more than my not inconsiderable body weight with ease. I put it down to the low centre of gravity which makes them so successful with a show of pure, brutal strength.

The day started with an early (before 7.00am) train into Waterloo, dressed in my full volunteer uniform of the now iconic purple polo shirt, beige trousers and Adidas trainers, complete with Swatch watch, baseball cap, waterproof jacket, haversack, umbrella and water bottle; followed by the Jubilee line and DLR (Docklands Light Railway) to the Excel in London's Docklands. I made my first mistake at this point, getting on the wrong DLR (it was damn early!) and having to get off at West Silvertown, across the river from the Excel, under the route for the new cable car crossing the Thames.

It was a beautiful start to the day, crystal bright skies and sunny. The walk from West Silvertown set me off in a good mood for the 20 minute or so to the Excel entrance. What greeted me there were seemingly thousands of spectators wanting to get in. After the security checks which everyone has to face, even volunteers, I was in and late for my first briefing. Never mind found workplace services and reported in. A team leader came brief me on what to do next and I went down to the weightlifting arena to check in. The Excel was full as I had ever seen it, and it was all Olympics, LOCOG (The organising committee) having taken over the whole building which is 600 meters and long and takes about 15 minutes to walk the length of the main ‘boulevard’ down the centre:

So my first day was to be in the weightlifting arena. Thinking that I might be cheerfully checking tickets, showing people to their seats, helping out generally, I was instead part of a team ‘backstage’ which helps to get the athletes, judges, officials and other ‘Games Makers’ as we are called through the right entrance with the right credentials (called g in Olympic parlance ‘accreditation’). Just like the bouncer, sorry door supervisor, at the nightclub, if you haven’t got the right accreditation, you ain’t getting in. The day was spent moving around to different areas checking variously athletes, judges, technical staff could get in to the area you were responsible for. Didn’t see one spectator, or deal with any lost children. Still a vital and important job, I’m sure, but there were long periods of little activity, interspersed with lunch or a break. Lunch was free and taken in a huge upstairs room for staff only, there must have been 1000 people in there all having a meal. it was adequate and quite filling but too early for me at 11 o’clock. I use the old military adage, eat when you can as much as you can. Pity the latter part of that old saw wasn’t true. For some of the time I was stationed just near this sign: 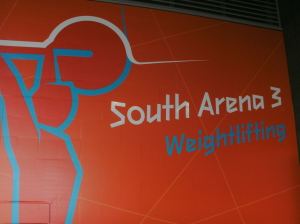 ….to check in the athletes, who were from such varying countries as Moldova, The Solomon Islands and Poland. None of them were particularly talkative but I suppose they were all focussed on their task, to win medals. The day ended with a briefing to discuss what went wrong and what was good. Ideas were discussed and although I had been there for nearly 7 hours it hadn’t felt like it. There were some issues which would be passed up the management chain, but whether anything would be done, well there is only 12 days left so it is doubtful.

One of the nice things about being in uniform is that people talk to you, strike up conversations, ask what you are doing and where. This is the best bit of the whole job of being a volunteer, telling them how much you enjoy it, and the journey you took to get there. It is very gratifying that most people think like this and applaud the efforts of everyone involved to make the London 2012 Olympics a success, not like some elements of the media. I shall return to this theme in the future, suffice it say that I find the attitude of people like Peter Hitchens in the Mail on Sunday to be intolerable. He may not like anything about the Olympics and sneer at its cost, overspend and general overblown bonhomie about it, but the all the people I have met support it to hilt. So to quote me from elsewhere, yah boo sucks to those who denigrate the Olympics and Britain’s whole involvement in it. I’m afraid your views really don’t matter.

Enjoy the rest of the Olympics, there’s not much time left, and we’ll never see the likes of it again. It is the best thing that has happened to this country for a long time.

Retired aerospace engineer, first with the Royal Air Force and then BAE Systems. Now enjoying a variety of activities and not getting bored. I was a Games Maker Volunteer at the London 2012 Olympics and a volunteer at the Rugby World Cup 2015 in England. I was also a volunteer at the 2019 Cricket World Cup in Southampton. I intend to blog about what interests me.
View all posts by cliverh →
This entry was posted in Olympics. Bookmark the permalink.