First of all apologies for the time lapse between part 1 and this one. Been a bit busy….

So we arrived back to good old blighty on 13th February and between the end of Part 1 and then we did a whole host of different stuff, including: Australian Open Tennis, T20 cricket, 10 days in FNQ (Far North Queensland), Lakes Entrance, Walhalla and loads of Melbourne.  I know it seems like a long time ago, but basically March for me was written off because of two chest infections and two lots of antibiotics, not a good time.

But back to Australia: After that first very hot weekend, Teresa and Kev planned a weekend away in Lakes Entrance which wa about 4 hours drive away. teresa had booked a small B&B via AirBnb (me neither!) and we made our preparations and started on our journey west of Melbourne.

The weather was lovely, quite hot and it was a long drive. We stopped off at a little town on

the way and had coffee and cakes, yum yum!

The B&B was nice and near the town, about 10 minutes walk away, but very quiet. We did a bit of shopping at the local Coles (where else) to cook on the BBQ at the house. There was unusual sleeping arrangements there, it had one large room upstairs with beds at either end separated by a curtain: but it was only for one night so didn’t matter. There were beautiful views over the nearby lake which formed part of the system along the coast. We visited Raymond Island which is a haven for Koala bears and they are everywhere: 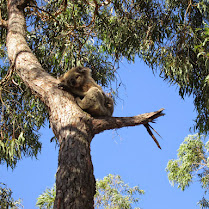 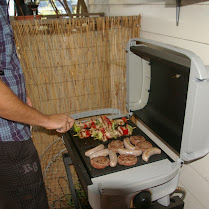 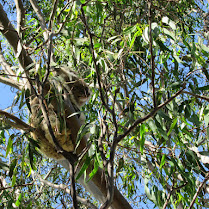 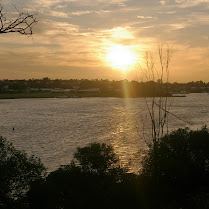 From there having seen 90 mile beach (really) and the local town (a bit like Blackpool without the tower and warmer), we set off for Walhalla, which was the centre of the Victorian Gold Rush. This  was about 1.5 hours from Lakes Entrance:

An interesting journey, we got lost in the mountains, took wrong turnings and ended on a road to nowhere, which actually overshot the town, but we found it eventually. It’s been preserved to be like it was in the late 1800s. It was a fascinating place, people still lived in a lot of the homesteads and the original hotel is still operational. The mines were dug to extract the gold, but fizzled in the early 20th century: 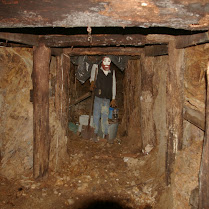 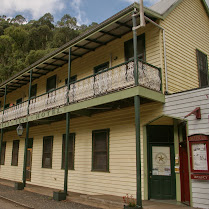 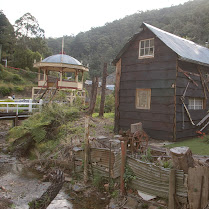 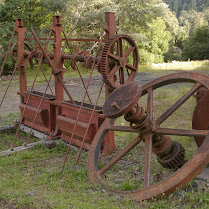 It was a mazing place and we enjoyed a few hours there, driving home in the gathering gloom. I drove most of the way home in the Ford Falcon that Kevin had borrowed. Lovely car to drive made it all so effortless, it’s a pity that Ford will stop production at the end of this year, with the other indigenous manufacturer Holden stopping next year means that there will be no car production in the Australia for the first time in over 90 years. It was a lovely time we had with Teresa and Kev, and we arrived back tired and happy.

Our next ‘event’ was the Australian Open Tennis at the Melbourne Tennis Arenas. We went on the 2nd day and it was just a question of catching a tram there and turning up. Tickets were available on the door. A bit different from Wimbledon where you have to queue all day (like we did a couple of years ago) and then you get in at the end of the day. We had a nice day there, saw some tennis (although I’m not a great fan) and it was a tick-in-the-box experience. Nonetheless getting to the final where Andy Murray lost would have been a bit more of a challenge (we watched the match in a pub, much more convivial): 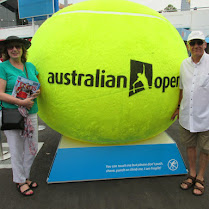 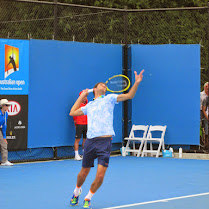 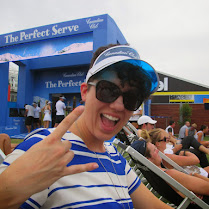 I’m more of a rugby and cricket man, but each to his own. Teresa and Kev enjoyed and so did Fran. Six months before we got to Australia this time we decided we wanted to go north to the Great Barrier Reef. So we booked flights and a hotel in Port Douglas from the UK to spend 10 days in Queensland or FNQ (Far North Queensland) as it it’s called north of Cairns. We caught the flight on the Wednesday morning. Teresa said just catch a cab on the road outside the flat. We walked out, Fran put her finger up and a cab from the other side of the road did a u turn and picked us up! Bargain, and he took us to Tullamarine (no I don’t know either) which is the main national and international airport for Melbourne. catching the flight was uneventful, but amazingly it shows how big Australia is because the flight to Cairns (with Australia’s equivalent of easyjet – JetStar) was 3½ hours!:

The difference in temperature and humidity in Cairns though was remarkable, with typical temps of 36°C and humidity of typically 95%. We had arranged a coach pickup from Cairns for the roughly one and a bit hour journey to Port Douglas. The journey along the coast was spectacular and reminded me of the Great Ocean Road in Victoria (see the blog about our last trip), but we got to Port Douglas, a small town on a peninsular:

We opted to stay at the Port Douglas Resort, which consisted of self-catering apartments surrounding a central pool and BBQ area. The kitchen was well equipped with everything you needed so it was nice to be able to cook some of your own food. After we arrived and dumped our cases we wandered into town which took a few minutes and got an ice-cream straight away, it was damn hot!  It’s basically a town built for tourism, there’s not much else in the way of industry although it was the centre of the local sugar beet industry, which is still going strong, and where most of the production was sent out by boat to places like Japan which liked the fine grain nature of the beet grown in the area. 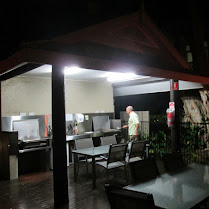 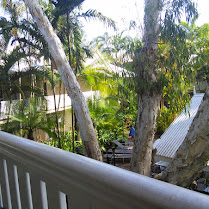 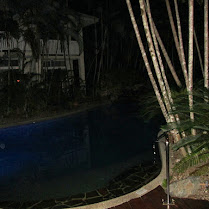 The main reason for going up to FNQ though was to ‘do’ the Great Barrier Reef (GBR). But prior to this we had a trip up the Daintree river or inlet,which was a gentle paddle boat trip, to hopefully see crocodiles, but in the event we only saw the one, affectionately called Charlie by the amusing skipper of the boat who gave a running commentary.  Personally I think he was Charlies’ agent and got him to move when we were going past, and he did so on que. 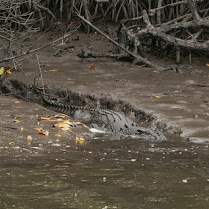 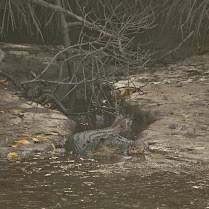 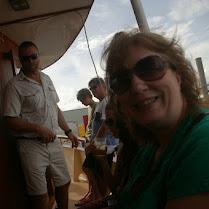 That’s the skipper behind Fran.  The trip was very nice, but it showed that there were plenty of wrecked boats in the river, some abandoned, some deliberately sunk because of nefarious activities, some just neglected: 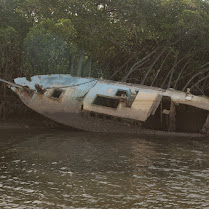 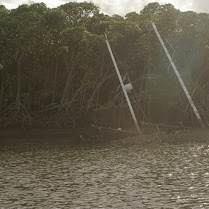 So after a week we came to main course after the hors deurs: The GBR trip. We booked to go on the whole day trip, 8.30am to 4.30pm including snacks, drinks and lunch. It was a fabulous day out, visiting three reefs Satellite, Batt and Tongue. We were on a snorkel only trip, because we’ve not done scuba, so it was a complete crowd of various levels of expertize in snorkelling. We were accompanied by two marine biologists, and three other crew so it was a very informative and interesting experience. 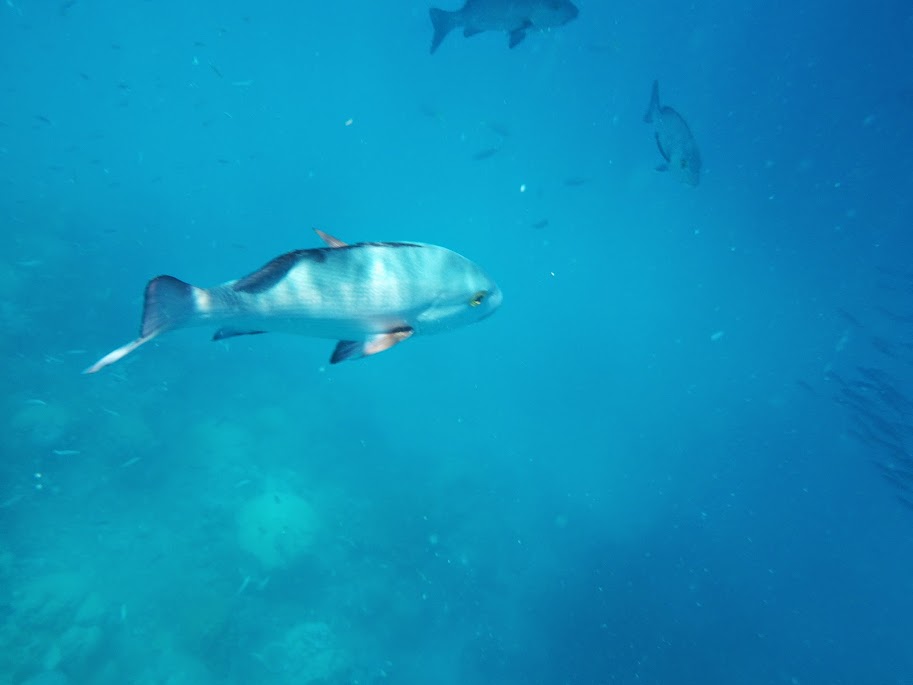 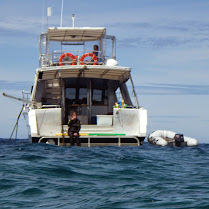 The boat, Fran taking a rest 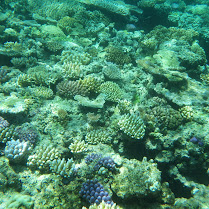 The whole day was a real experience and is one of those box ticking ‘to do’ things on my bucket list. There is no feeling like looking under the water and seeing fish swim about. The reefs are also fascinating, we were told not to touch any part of the coral, because it is surprisingly fragile. And contrary to common belief coral should not be a bright colour, because that indicates that the coral is under stress; the healthy colour of coral is sort of browny grey all over. As can be seen above the coral we saw was in rude health. We didn’t see turtles or sharks so that was a bit disappointing ‘wrong time of the year’ apparently. 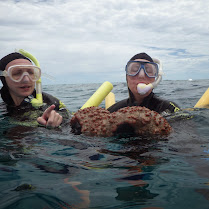 Still we had a great time, but after 7 days we were getting stir crazy so hired a car for the last three. We travelled all over the are visiting the daintree rain forest, Tribulation Bay; where Capt. Cook landed initially saying ‘this is where all our trials and tribulations begin’. It was a bit of a tourist trail leading eventually up to Cookstown, which we didn’t go to because you could only get there in a 4×4, not the little Holden Sprint we had (Vauxhall Corsa in disguise). It did us well though and we explored up and down the coast, eventually leaving on the Saturday 31st January to head back to Cairns. We got there very early so decided to visit the Botanical Gardens, but towards the end of walking around the heavens opened, and when they open there, they OPEN! We sat in the car for a while looking at the rain, then drove to the airport, handed in the car, and sat looking at the rain in the departure lounge. We arrived back in Melbourne on the Saturday night, and got a taxi back to the apartment, to be met by Teresa and Kev.

The next 12 days were spent in and around Melbourne with many visits to the town and surround, including a walk from South Melbourne beach (after visiting the superb market)

to St Kilda in 33°C! Needless to say we did it and it was a great experience to be walking along a beach in February in those temperatures. We also went to the St Kilda music festival which is a huge event, and it was another gloriously hot day, with all sorts of stalls, food and several stages showing many different genres of music. There was also the main pub on the beach, the Espy (The Esplanade) which seemed to be the hub of the whole event.  We went there before we went to Queensland and watched several bands there then.

Other highlights of the whole trip included: The Melbourne Aquarium, The Eureka Tower, The Tram Dinner trip ( at night this time) , going round Albert Park, the F1 track which ran on 15th March, culminating in the opportunity to see Sting and Paul Simon in concert at The Rod Laver centre, where the tennis Open had been held just a few weeks before.

All in all then and fantastic trip, our 2nd, and it’s thanks and love to Teresa and Kevin for their great hospitality, kindness and putting themselves at their disposal that made this trip so memorial, and a perfect compliment to the first trip back in 2013. We hope to be back again really soon!

Retired aerospace engineer, first with the Royal Air Force and then BAE Systems. Now enjoying a variety of activities and not getting bored. I was a Games Maker Volunteer at the London 2012 Olympics and a volunteer at the Rugby World Cup 2015 in England. I was also a volunteer at the 2019 Cricket World Cup in Southampton. I intend to blog about what interests me.
View all posts by cliverh →
This entry was posted in My World and As I See It and tagged Australia, Etihad, Melbourne, Port Douglas. Bookmark the permalink.