After getting back from the Haute Pyrenees, Friday was a slight deflation, but turned out to be the nicest day weather wise, the day before we due to make way back.

We went shopping for our journey back, we had planned to spend 5 days getting back to Calais 650 miles away. Before we left Fran took an old Christmas card with all the address details of her cousin who lived in the Dordogne valley and would be practically on our route back. I had my last (cold) dip I’m the pool, then we BBQ’d some meat, with extra to take with us. We had to be out of the gite by 10, and our next planned stop was Auch, about 40 miles North. We said our goodbyes to Pete and Wendy and started to make our way via national roads towards Auch. We found our Campanile hotel about 3 miles outside the town, which is famous for being the birthplace of D’Artangan later immortalised as one of the Musketeers by Alexander Dumas. We had a bit of rain, but it cleared up later and we went back into town for a meal, though it being the weekend before Bastille or National Day it was surprisingly quiet. We had planned to visit Toulouse the next day and bought tickets at the SNCF station in Auch to travel the next day Sunday 13th. It would save driving and parking in an unfamiliar town so was thought the best solution and in any case we like trains. 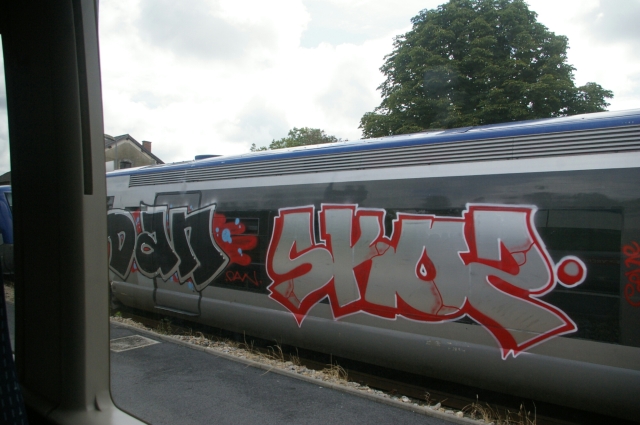 As you can see graffiti travels everywhere….

…and the station facilities are sometimes minimal.

Inside is just as beautiful, and weddings and other functions are often held in here 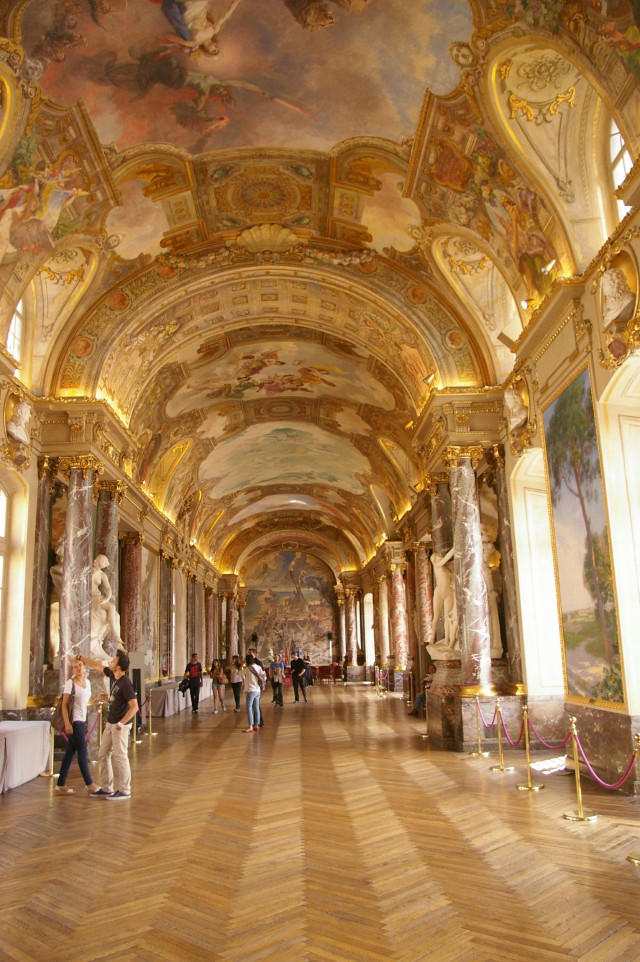 Toulouse had a lot else to offer, but because we were only there for the day, we joined the round city train from the Place du Capitole, a snip at €6.

(Pictured, the number plate of the sight-seeing train, just to break up the text!)

I won’t bore with all the sights described through the headphones in English, but needless to say there were lots of churches and a huge river and a canal. The details go in one ear and out the other anyway, but it is lovely city and well worth a longer visit. I’ve also got an interest in the name as it is (for whatever obscure reason), the name of our home, which doesn’t have a number. We had a nice light lunch and made our way back to the Gare. The journey was about 1 1\2 hours so we got back to Auch about 8 and had a nice dinner in the Irish Rock bar while the World Cup was showing on at least 10 screens in the bar. We sat outside and it was very pleasant. The next day we were off to our next stop.

As mentioned before we were going to visit relations in Lalinde in the Dordogne valley, and it was about 100 miles north. It was all RN (Route National) so was like UK A roads but going through villages. Eventually we arrived near Bergerac and turned right, following the Dordogne as far as Lalinde. Then it was a question of finding where we were staying which was no easy feat. Although our Tom-Tom SatNav had guided us well up to now, on this occasion it lead us up the garden path, literally. We fell into the trap of blindly following the SatNav instructions and ended up in someone’s driveway. She gave us better directions in broken English, and we found the road but not the house. Then eventually we saw someone stood in a road leading off to the right and he waved at us, then we knew we were at the right place. It was a converted barn, very tastefully and nicely done, and we had a bedroom over looking the front of the house:

We had contacted Fran’s cousin, David and he invited us to dinner on the Tuesday at his wonderful house overlooking the Dordogne and the town of Lalinde.  Unbeknown to her, his sister Patricia and her husband Bob were also there having spent 5 weeks in the UK visiting their families and friends from their home in New Zealand.  This was to be the last leg of their holiday before returning home and what a surprise it was! We had a lovely dinner with them until late and promised to meet up again, soon:

The next morning we had to start our journey home, about 450 miles to Calais. We left our lovely B&B and did some shopping and headed North on the uneventful journey to our next stop Orleans, in another Campanile. Just staying the night after having dinner there we did more shopping for the wine etc, and made our way towards Paris. It’s still 180 miles from Paris to Calais so a fair amount of driving to do. Unfortunately Paris does not have the luxury of an M25 and getting through it can be a challenge, especially if there is an accident in one of the tunnels on the peripherique which is what delayed us for about an hour and a half. The rest of the trip to Calais was uneventful and we arrived there well in time to catch our Eurotunnel train back to Blighty. We arrived home in Surrey at about 8.00pm, tired but happy. It had been quite a trip from the lowlands in the North of France to the height of the Pyrenees, the beauty of the Dordogne and Lot Valleys, famous old towns like Auch and Toulouse, meeting old friends, visiting relations, and driving 2000 miles in the process without a hitch.