I’d forgotten that in my hurry to get down on paper (figuratively), my experiences in Australia that I had missed some of the things Melbourne had to offer.

In our first hectic week Teresa (daughter) and Kevin (son-in-law) had: taken us on a walk around their local area of Brunswick; seen Teresa in her amdram play and met some of their friends. The Australians seem to plan for physical activity: scenic footpaths are well planned, cycle paths parallel these, and are used extensively. Cycling is well catered for generally, with lots of cycle shops and dedicated paths even in the city centre. Also helmets are a legal necessity: excellent.
Teresa’s play was ‘Up For Grabs’, by David Williamson a well known Australian playwright. It was staged in the West End in the early 2000s with Madonna of all people in the title role. Her performance was slated by the critics, mainly because of the changes she wanted to make to her character’s name and other things, and it only had a very short run. In Australia it has been staged many times and is very popular. Teresa played Simone, an art dealer who is trying to play several buyers of a painting against each other to get the best price, while also trying to cover her possible loss if she doesn’t get the right price. It’s an hilarious romp through the whole gamut of emotions and laughter, with surprising twists and a satisfying denouement. Teresa was of course fantastic, and delivered her well-timed lines with aplomb and confidence, and I’m not just saying this because she’s my daughter, she was genuinely superb, a budding professional if I ever saw one.

We met their friends Simon and Gaspare in a night market in Victoria Market a 19th century artifact, which also holds day markets several times a week. The place was heaving: 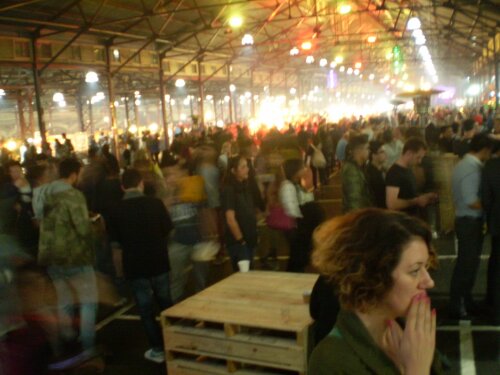 A great emphasis is placed on food in Melbourne and the market was no exception. Queues were snaking around the whole market for the delicious smelling food from the four corners of the world. We settled on the shortest queue which was a stall selling pulled pork rolls; really tasty. There were also a couple of bars selling a range of beer and wine. Now, I’m a real ale man and had the preconception that Oz was all about ‘bloody lager’. No, not the case, many so-called ‘craft’ beers are produced, and these would be closest to what I would call bitter, but the Ozzies like it ice cold, rather than my preference of cool. Oh well, when in Rome…

We had a week to go before our Sydney trip so we certainly saw a lot of Melburnian life including a Sunday afternoon roast dinner in a nightclub type bar with a seven piece1920s jazz band; Andrew Nolte and his Orchestra, playing sometimes obscure songs from that era. But they were very good, look at their page:

Actually this is from a steak restaurant we went to later, but it gives an idea

We went for walks around central Melbourne’s myriad lanes and shopping streets of which there are many. We also went for a stroll along the riverside and walked through the biggest casino I’ve ever seen, part of the Crown hotel. At 10 in the morning people were playing one-arm bandits and croupiers were dealing blackjack hands: unbelievable! The whole city is beautiful, and within a short distance you can get to a lovely beach at St Kilda or rolling countryside northeast of the city, with wineries and craft breweries. Then a bit further out, about an hour, you have the Great Ocean Road (GOR), which is an amazing rugged coastline of swooping roads falling down to the sea, followed closely by soaring cliffs and violent drops, an incredible journey. More of that in another blog. Also within the city limits are three world class sporting venues: the Melbourne Cricket Ground (the ‘G’), the AAMI rugby league stadium and the Rod Laver Arena, which is used for concerts as well as for sports. All these within strolling distance of the centre. Maybe I’m waxing a bit too lyrical, but the town has that effect on me.

Teresa is involved with the Melbourne Fringe Festival which runs until early October, so she’s involved with volunteering for that. The advantage is that we get to see some really good fringe theatre/shows with the odd freebie thrown in. Incidentally, Aussies generally shorten or simplify words such as freebie, which is known in the UK, but also use terms such as selfie (self portrait using a phone or camera), stubby (short bottle of beer), tradie (tradesman), sunny (sunshine – only kidding!), and tend to say Fed Square or Freo (Fremantle). All very self explanatory and kind of quaint. The other thing I’ve noticed about Oz, as I’ve mentioned before, is the take up of shop space, which is exceptionally high. In discussion at a fringe event (The Last Temptation of Randy, a very funny glove puppet), and afterwards I discovered the reason: mail order. Its almost none existent in Australia because so much stuff is imported, and usually from great distances. Whereas everything we want from eBay, Amazon or Argos is usually delivered within a few days, and we want to know why if it isn’t, here you order stuff and then forget about it. When it arrives four weeks later, you are pleasantly surprised it has arrived so soon. So this explains the demise of the high street store in the UK, and why it’s booming in Australia: you can’t get it quicker or probably cheaper any other way. Another plus point for this fascinating country.

I leave you with a view from one of Melbourne’s bridges. My next exciting installment (if you can bear the suspense) will be our trips to Tasmania (Tassie!), and the GOR Great Ocean Road. See what I mean!

1 Response to Melbourne odds and sods