It started out about a year ago, when No. 2 daughter and husband announced that he had secured a position in another country. They have been looking at Brazil, Italy and others, but it finally turned out to be…Australia.

It was always on the cards that we would be going to visit them sometime, after all the precedent had been set with trips to Edinburgh, Brazil, Essex. So the planning started with arranging the flights and timings and we decided on a six week trip in the late summer/autumn. If six weeks seems excessive, sitting here after one week has flown, I don’t think so. After all the cost of flights there and back is no different over that period than for two weeks and we are staying for the majority of the time with the young couple. So flights, transfers, insurance all sorted. When the time came, it would seem that the 24 hour travel time was huge. In my mind it turned out to feel shorter than it was, but ‘t wife thought it was much longer. Horses for courses.

So picked up by said couple in a locally produced Ford something, the company Kevin works for. For a fleeting moment, it looked we had done a huge loop, and landed back at a strange airport. On the journey home, looking left and right on the left hand side of the road, we could have been driving away from any airport in the UK. The grass verges looked the same, the road signs were very similar, the cars on the road were familiar, the whole setup looked the same as at home. We arrived at the apartment and had a pasta take-away and we didn’t feel too bad, jet-lag wise. As the time drew on it got worse, but after 6 days I think I’ve broken the back of it. So to the city itself. Its a mixture of American grid street system and trams, coupled with a typically European eclectic mixture of modern and old buildings. In terms of large cities its reasonably large and spread put, but the CBD as it’s called (Central Business District – an Australian term), is compact. The famous Flinders station stands on one corner of the CBD, flanked by Federation Square and Collins Street which runs through the centre of it. 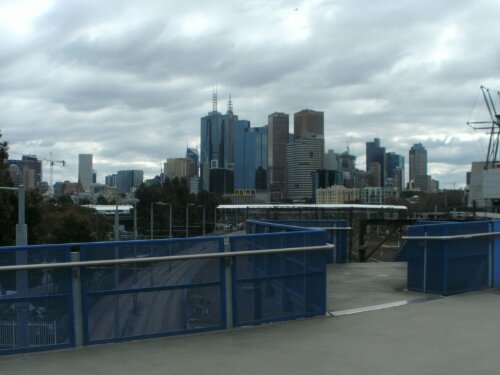 Anyway I’m anxious too get this out, haven’t had time to jot down the rest of the week. Sydney and the Blue Mountains to come!