No, it’s not a spelling mistake, Ruffits is a name given to a group of people who like to go camping (or caravanning), at various locations around Sussex and Surrey for good food, good company, good music.

It all started many years ago by a couple of friends who wanted to go camping and create music. Then through several iterations, the modern day version is where we all meet from a wide area, including locally, Norfolk and West Wales to play acoustic guitars, eat, drink and generally having a nice time. It’s like nothing you’ve seen, the musicians/groupies arrive avec kids, dogs, caravans, motor-homes, tents and all the associated paraphernalia on the Friday or Saturday. The camp site is a farmers field, which has to have three criteria: fresh water, waste disposal and a pub within walking distance. For many years we’ve used Charlie the farmers’ field in Newdigate, just off the A24 Dorking to Horsham road, but for the last year or so it has been in a field behind several industrial buildings near Friday Street village about 4 miles further south. To add to the mix, this last weekend was the camping ground for a leg of the South Eastern Area Moto-Cross championship, so the noise from the bikes on the nearby course was deafening at times. So we all settle down, make camp, say hello to friends old and new, relax. Luckily we had superb weather the whole weekend so that always makes it a far nicer experience.

See a typical scene around the camp fire above, explained later

Several people have already gone into the nearby woods (another criteria), and collected fallen branches to use on the camp fire. 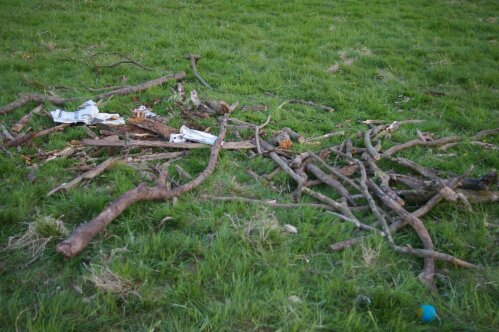 The afternoon is taken up with sitting around, reading, practising a song or two or jamming and some make an early sojourn to the pub for a snifter or two. Others help to dig a fire pit, carefully storing the cut sods to replace at the end of the weekend. The fire is started and will continue non-stop until the end of the weekend. Once the fire is going well, the ‘plate’, a stainless steel plate 1/4 inch thick, about 24 inches square with a pointed stainless steel round leg about 24 inches long fitted on each corner, is pushed into the ground over the fire to be used as a griddle plate. This is used by most people on the site, so I guess the burning of the firewood is counteracted by less gas being used to cook. Cooking on the plate is an interesting experience, mainly to see what people actually put on the plate; in the main burgers of some sort. The veggies amongst us would be horrified but they probably make their own arrangements, like cooking their nut cutlets away from the plate, presumably. Generally whatever is cooked on the plate mixes its juices with what you’re cooking so making a very tasty combination. Don’t wince, it works!

Cooking over (about 8-9 o’clock) the cooking plate is removed (if anyone hasn’t done their cooking by that time, it’s a bit tough), and the fire is built up: 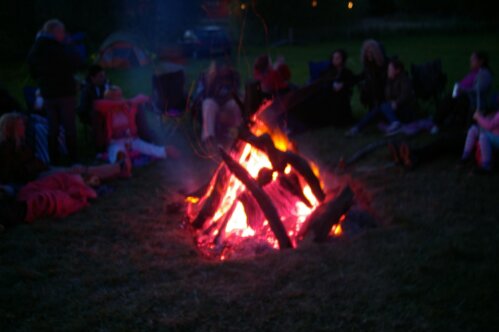 People have already started to move their camping chairs around the fire in a big circle around it (first picture). As the fire builds up and gets hotter, the circle widens to let more people in as well as trying not to fry their fronts and freeze their backs. The whole point of the weekend has already got under way with the early starters strumming away singing a few songs. By the time the fire is fully roaring away, most of the happy campers are gathered around listening or performing, which comprises about 1/4 of them. 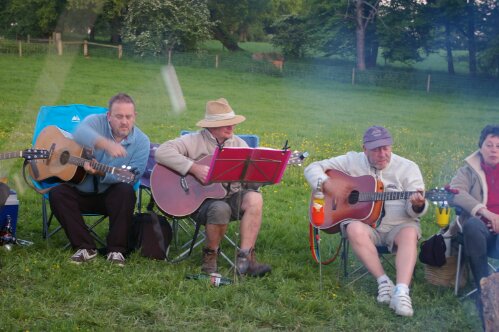 There is no queuing system, whenever anyone fancies singing/playing a song they get on with it. If anyone else knows the chords/words they join in, otherwise the rest listen and enjoy. The standard is very high, with some of the players being semi-pro musicians with their own bands and gig list, others are just learning to play and sing, others have come on in leaps and bounds and have become virtuoso. There is also a wide variety of instruments: on Saturday there were guitars, all acoustic of course: no power available!, a banjo-guitar, flute and harmonica. The banjo-guitar is an unusual instrument, one I have never seen; it’s a banjo shape, with six strings and guitar tuning and sounds just terrific. The songs range across the spectrum: folk, pop, latest pop, traditional, you name it it’s probably been played.  The evening goes on, with moderate intake of alcohol until sometime in the early hours; in the early days yours truly was one of them. Nowadays the youngsters take over the late shift, quietly strumming and singing until the wee small hours, often 4.00am or later. Obviously the crowd steadily drift away, until only the stalwarts are left.

It’s a cathartic experience, leaving one feeling richer of life, content, relaxed and totally happy.  There is no contest, no conflict and little argument, just friends getting together, chatting, singing, eating, drinking and doing no harm to anyone and dare I suggest none to the environment.  On the Sunday, or in fact any morning, the fire embers are rekindled for breakfast. Bacon, eggs, sausages etc are fried on the very hot plate and generally eaten around the fire side, but some repair back to their caravans/tents. The fire is kept going, ‘breakfast’ lasting until the last have got up and decided to stumble over to the fire to slap some hangover reducer on the plate. Then it’s off to the pub.  This weekend gone, the pub was a 15 minute walk away over some fields and we were rewarded at the The Royal Oak

Friday Street with a range of very nice bitters, including Surrey Hills, but I’m glad to say no lager – hooray!  It was a lovely sunny, warm day and nothing beats sitting outside quaffing a couple of very drinkable ales and chatting while the kids played and dogs snoozed.  Then a short walk back for maybe a siesta and a coffee/lunch before an afternoon of strumming, playing bat and ball, walking, sleeping, ‘other activities’, and the cycle begins again again with the plate and the fire. On the Sunday the afternoon was punctuated by the sound of the moto-cross bikes going through their paces, but at 5.30 it all stopped, only the low level sounds of the jets departing nearby Gatwick airport disturbing the peace. The evening is the same pattern, some have left to go elsewhere, some have come back and new ones come just for the day/evening, it’s all  a big happy gathering. The final day (on this occasion, being a Bank Holiday) is lower key, the fire is extinquished by leftover water, the sods are put back, and the field is left as we found it.  The goodbyes and see-you-next-times are said, and we all depart to our various destinations, some have an hours journey, some 4-5 hours, but it’s all worth it.  I’ll see them all later in the year at the next one. 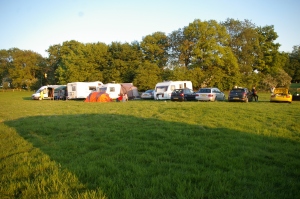 Retired aerospace engineer, first with the Royal Air Force and then BAE Systems. Now enjoying a variety of activities and not getting bored. I was a Games Maker Volunteer at the London 2012 Olympics and a volunteer at the Rugby World Cup 2015 in England. I was also a volunteer at the 2019 Cricket World Cup in Southampton. I intend to blog about what interests me.
View all posts by cliverh →
This entry was posted in My World and As I See It and tagged camp fire, camping, good pubs, music. Bookmark the permalink.