Another one bites the dust…

A perfect weekend, not perhaps weather wise, but in other aspects, pretty damn good. It had been arranged some months ago that the old ‘standard’ or banner of Number 3 Fighter Squadron Royal Air Force would be ‘laid up’ in a church as is the custom. The standard is the traditional rallying point in battle for fighting men. As long as the standard or banner could be seen, the men could rally round it and defend the chief, king or head of the army/tribe. This is still the case and most British military units have a standard of some sort. Standards for Royal Air Force squadrons were created by His Majesty King George VI on 1st April 1943, to mark the 25th anniversary of the Royal Air Force. Squadrons qualify for the award of a standard after 25 years service, or by having earned the Sovereign’s appreciation for outstanding operations.

In the case of 3 Squadron, the standard is a fringed and tasselled silken banner, mounted on a pike surmounted by a Golden Eagle and emblazoned with battle honours. The standard in question was presented to the commanding officer of 3 Squadron on 3rd June 1983 by Air Marshal Paddy Hine, and the latest one was presented at the 100th anniversary of the squadron on 12th May 2012. Since a unit can only have one standard, it is traditional for the old one to be laid up in the ‘House of God’, normally for Royal Air Force units, St Clement Danes in London, the Royal Air Force church. In this case though, a former commanding officer (CO) of the squadron, and former Chief of the Air Staff, Air Chief Marshal Sir Richard Johns GCB, KCVO, CBE, who lives in Chitterne Wiltshire requested that the old standard be laid up in his local church, St Mary and All Saints.

This was agreed to, and the current CO, Wing Commander I Townsend made arrangements for a formal parade for the laying up to take place. This included a banner guard of honour with weapons drawn, a flight of airmen to accompany the old standard and a formal handing over of the standard to the church, represented at the ceremony by The Reverend (Group Captain) Nick Berry, Deputy Chaplain-in-Chief to the Royal Air Force. At the end of the service the assembled congregation, which included members of the 3(Fighter) Squadron Association; for former comrades, was treated to fly over/past by a Typhoon FGR2 Eurofighter of 3 Squadron, based at RAF Coningsby and a Hurricane III from the Battle of Britain Memorial Flight also based at Coningsby. There followed some presentations: a full leather-bound copy of the flight log book of the first CO of the squadron, Major R Brooke-Popham (1912), by his son Capt (RN) Philip Brook-Popham to the current CO, and in return he was presented a 100th anniversary diarama of the first aircraft in squadron service: The Box Kite, and the latest, the Typhoon mounted on a wooden plinth with the squadron badge in between by the CO. 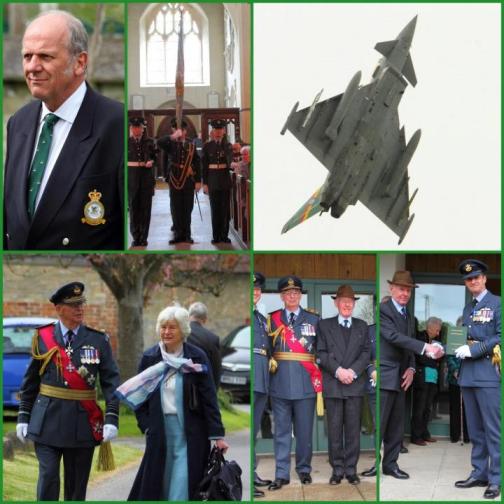 Picture shows a collage of the day

And the title reference ‘another one bites the dust’? Well, the standard has to be kept in the ‘House of God’ until it ‘turns to dust’ and all those brave deeds done by the members of the squadron to earn the battle honours will stay with that dust.

As I said a great day, after the flypast, we all sat down to a lovely salad lunch, just as the heavens opened. The next day we had arranged for a third time to take our balloon flight, postponed from last September, and which had been arranged by our daughters as a anniversary present. Unfortunately the first two occasions were cancelled because the weather conditions weren’t good enough to fly. The same happened on this occasion, and it was cancelled again, hard to believe in mid-May, but that was the case. Oh well try another day I suppose, its not that we don’t want to do it, but its still a bit of buttock clenching idea, especially after the disaster in Egypt. Teeth gritted we’ll do it.

I’m keeping it light this time so no comment on current issues, except this thought: ‘The energy companies report an increase in consumption during the cold winter and therefore increased profits’. Quelle surprise! Doesn’t exactly require an Einstein to work that one out, i.e. when it gets colder, we use more gas/electric. Night night.

2 Responses to Another one bites the dust…