And the moon turns the tide gently….

2012 has come and gone, the world didn’t end so here we are and we have to get on with it. Actually the way I read it the Mayan calendar just came to an end without them saying the world was going to end, just the soothsayers and believers who perpetrated that idea. I agree with Putin, the Russian President who said the world will end in umpty dump million years. But I expect there will be another hidden calender unearthed from Nostradamus or the Bahá’í Faith or someone else who will predict the end of the world again and it will all turn out to be tosh.

The New Years Honours List, well no surprises there then. I wonder if other countries have a similar honours system. There is no equivalent to Sir, which is an ancient honorific title from the knights or baronets, but there is the Papal knight, of which one example was Jimmy Savile! It seemed to be a shoe-in for Bradley Wiggins to get his sirship, especially after winning the Tour de France and Olympic Golds, then capturing the Sports Personality of the Year. Which incidentally is curious to me; the word personality conjours up all sorts of ideas: The visible aspect of one’s character as it impresses others: He has a pleasing personality; a person as an embodiment of a collection of qualities: He is a curious personality; the sum total of the physical, mental, emotional, and social characteristics of an individual; the organized pattern of behavioural characteristics of the individual; the quality of being a person; existence as a self-conscious human being; personal identity. Can all or any of these be applied to someone who is just good at a particular sport, or does they embody other qualities which would give that person a better personality? Discuss. But back to the Honours List, it seems quite fair for the Olympians to be honoured, but if the Olympics didn’t happen this year who are we left with? Quentin Blake well deserved illustrator, a few political donaters as usual, and the odd luvvy. But other than the sports stars it’s a bit thin, which I suppose shows that we worship sports above all else. 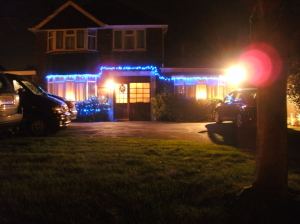 Christmas was very enjoyable this year. The girls and my nephew Leeward descended on us on Christmas Eve, followed by sister-in-law and partner for a couple of nights, then on Boxing Day another four relatives and partners, so for Christmas lunch it was seven sat down to haunch of venison, and eleven the next day for curry and chilli. Considering that we don’t see each other that often it was a success, no arguments or petty squabbles. We played on the XBox, went for walks, sang a bit of karaoke, and did the usual eating and drinking in between.

Before all that however we went to Pauline’s 60th party (black tie, masks) on the Saturday 22nd:

Yes I have got my mask on! 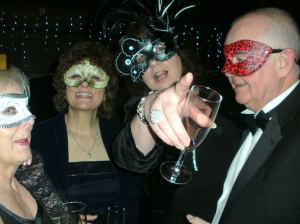 and stayed overnight in Brighton on the 23rd to see The Beat at Concorde2: http://youtu.be/Gxa3ZeQl8YM . So both events were a wind-down to the hectic few days that followed. The party was very nicely done at a golf club in deepest Berkshire, and Pauline, who said she had never had a party because of the proximity of her birthday to Christmas had a lovely time, so did we all: 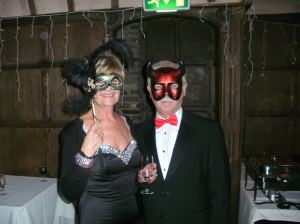 Seeing The Beat was a great gig, they played for 1 ½ hours non-stop and gave us very good value with hits such as Mirror in the Bathroom, Hands off She’s Mine and Can’t get used to losing You. Ranking Roger is still there looking as fit as ever, but is now joined by his son and shares the vocals with him. Good to see and recommended.

So now to the New Year and resolutions, which I have never made or kept. The 30th December is the anniversary of me giving up smoking in 1990, one of my better choices. I now cannot see the point of smoking and given my chance again would never have taken it up; so why do young people still do it? The cost is now so prohibitive to be out of reach of most surely? In this day and age is smoking still seen as a sign of maturity and being ‘hard’? I don’t see how it can given the dangers shown at every opportunity. Smoking is a disgusting, evil habit which doesn’t improve anyone’s health. The pressure group Ash still think smoking doesn’t do any harm and in fact puts taxes into the coffers for the government, presumably spent on the NHS to take care of smokers? To return to an earlier comment by me, in that the Olympics helped me lose weight, that is one thing I am going to work on. The weight I lost in July has stayed off so I can do it, and remain at a set level, but I’m not going to reveal it, just yet.

Oh well as they say in all the best cliches, and films: good luck in the New Year and have a good one. Clive