Too tired…..8th day and counting

Well, it’s happened eventually and despite my promise to my dear reader and myself I cannot do any justice to writing my blog tonight. It’s now 8.30 and I’m going to bed soon for another early start.

That was Saturday night, so I’m going to catch up with the last two days events, having now got two days off until my next shift on Wednesday. Elsewhere you read about the exploits of our sports men and women, but boy was I wrong about the lack of talent in our team, including the 400m silver from today; it’s a great achievement. But my take is on the more observed parts of my Olympics and the quirkiness of what happens during it.  So.. Saturday started in the usual way which I won’t bore you with, save that it was later start which was a nice lie-in, until 6.30!  I was allocated to boxing on that day, and there were ten bouts in the early session.  The weights ranged from 56kg to 82 kg and they were all feisty little fighters. I was again allocated in the seating ‘bowl’ the main job of which is to help people to their seats, resolve seat conflicts as they arise, and when everyone is settled, you can watch the sport. Bargain!  The session was 3 hours long and there were some good bouts including the Irish chap winning and a good match between the Brazilian guy and the Cuban No 1 seed, who lost narrowly in points. If the judges score identically so the points are equal, they employ a ‘count-back’ system to see which way the points awarded went in each of the 3, 3 minute rounds. At the end, we were released so started to make my weary way home, but three events were leaving at the same time so upwards of 30,000 people were leaving at the same time, again.  Another coffee and another wait on the balcony. So, a good day of watching the boxing, and as a I mentioned a late finish, and another early start: 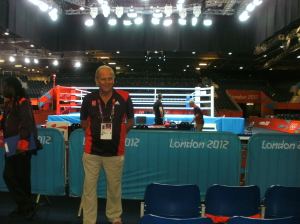 My group of fellow Games Makers

The ring before the battles

Sunday sprung nice and early but not so bright, I was on the 7.36 from the local station so not too late a start. The start of the wrestling today and I arrived at the Excel half an hour early – a record!  Quick cuppa and then in to the briefing in North Arena 2, which was used for the judo previously and had been transformed into the wrestling arena.  Sadly I never got to see any of it because I was allocated to ticketing.  This involves scanning the spectators tickets as they enter into the ‘spectator zone’ which houses everything for their corporal needs, food, toilets etc and don’t need to leave that area until the gates open and they can take their seats.  Ticketing is manic!  The barriers opened at 11.00 and they start coming at you, in a trickle at first then whole chunks of crowds coming at you all eager to rush through to get their seats, which they can’t do straight away as the gates into the arena don’t open until later.  So they mill around the spectator zone and spend their money  and wait, but of course I don’t see much of this. When the competition starts at 1.00pm theoretically everyone should be in their seats, but amazingly people were still coming in right up until about 3/4 of hour of the session to run. You would have thought paying that much for the seats would have meant taking full advantage of the time available, ce la vie. It was totally mad for 3 solid hours, with not a moment for a drink or almost to take a breath.  ‘Morning, how are you?’ ‘Buggies round the corner thanks’. ‘Sorry this ticket is for the later session’ ‘Have great time’ ‘Enjoy!’  Yes I know corny and ‘smiley service culture’ but it works, and people come back to you in a friendly way as well, with many asking if we are enjoying the games, how do you become a volunteer, do you do long hours etc etc.  Of course those whose first language is not English struggle a bit more to banter but their smiles say everything.  I have not an idea how many people I scanned through but the arena probably holds 10,000 and no doubt it was full.  We had 7 lanes of ticket scanners and they were busy all that time so the figures must have been approaching that.   Then a quick lunch break, but it’s a good 10 minute walk to the workforce rest area, enough time to chomp some grub and then back again.  In the time I’ve been doing the Olympics, and with the all the walking, I’ve lost 8lb! So here’s tip, reduce your carbs and walk loads, it works.  Got away on time and took this picture from the balcony of our workforce rest area, a view of Excel looking East:

Uneventful journey home, except of course the interaction between the public and me. You are always an ambassador for the Games when in uniform, as I know from my RAF days, so respecting this is easy for me.  You also get into conversation with many other Games Makes travelling on the tube or rail and talk the different areas they are employed in. Some unfortunately are in roles where they will never get the chance to see any sports so I count myself as very lucky that I have been able to see all the sports at the Excel even thought they would not be my first choice of viewing. But to say ‘I was there’ is enough for me.

So just a week left and the sports are becoming less and less as they finish. A tennis Gold and another one for Ben Ainslie who I met at work when he was sponsored by my company BAE Systems.  Nice guy and I have a picture of him with his signature, may be worth something later.  Talking about sponsorship, it struck me that the Beijing Olympics had advertising hoardings at all the venues and the sponsors were really ‘in your face’.  Catch a flashback on the tele and you will see what I mean. At London 2012 however, sponsorship symbols are hidden. Yes, the main players are well known and you may catch a glimpse of a well know product but not on the hoardings and banners around the venues that can be seen by the TV cameras.  This is I think a great tribute to LOCOG who no doubt made a conscience decision to do this. Some large corporations think they can take over the pictures with blatant advertising, but personally I don’t want it.  Well another day another dollar, two days off then Table Tennis on Wednesday, Taekwondo on Friday and that’s it!  I think I might carry on the blog after that, but if someone tells me don’t it’s boring, I’ll ignore them. See you later.

Retired aerospace engineer, first with the Royal Air Force and then BAE Systems. Now enjoying a variety of activities and not getting bored. I was a Games Maker Volunteer at the London 2012 Olympics and a volunteer at the Rugby World Cup 2015 in England. I was also a volunteer at the 2019 Cricket World Cup in Southampton. I intend to blog about what interests me.
View all posts by cliverh →
This entry was posted in Olympics and tagged Olympics. Bookmark the permalink.

4 Responses to Too tired…..8th day and counting