Sydney and the Blue Mountains Pt 2

So to continue the story:

The train journey of two hours was interesting in that it steadily climbs out of Sydney up fairly steep gradients (it seemed to me), without faltering or apparent drop-off of speed. The train stopped at a number of commuting areas on the outskirts, then stopped mostly, after Parramatta, at small mountain towns and settlements. The railway follows the western road highway exactly so it saves on building separate routes presumably. The coaches themselves have an interesting feature, besides having three levels, in that each bench seat backrest can be pulled in either direction, so that four people can face each other, or be in rows facing the same way. Useful if you don’t want to look at other ugly mugs first thing in the morning!

We arrived at Katoomba at about 5 o’clock on that Sunday, and again a helpful chap guided us to the lift, and another pointed out the direction of the YHA hostel where we were staying for four nights. Now being a mountainous area the town was not built on the flat, so we walked down a steep high street with the wheely suitcase and up the other side to the hostel which was handily placed next to the police station. That was a hell of a journey, about 3/4 mile I’d guess and I was quite puffed when we got there. Yes I know should’ve taken a cab but there were none around. We would certainly go back to the station by that method. The YHA building had an interesting history as a dance hall, hotel and religious order retreat, but had been a hostel for about 10 years. The man on reception was very helpful and showed us to our comfortable on-suite room:

No it’s not five star luxury, but the bed was very comfortable. The amenities were very good too with a huge communal kitchen and lounge areas. The next morning we walked back up to the top of town to get bus passes for the circular hop on-hop off service around the main attractions and sight seeing areas. For $25 they last two days, but the guy doing ours stamped them for three days: result! We went round the whole circuit first to see what was what and spent some time looking around the whole Katoomba/Leura area. That evening I had arranged to meet up with an old RAF buddy of mine who I hadn’t seen for over 30 years. He was driving from Richmond, about an hour away, and wanted somewhere to have dinner. We had gone past the ‘RSL’, which is very like the British Legion only nicer. You don’t have to be ex-service, they’ll sign anyone in so we decided it would be OK. John, my friend, met us at the YHA with his two daughters Chloe and Tash. It was great to swap stories after so many years, but we tried to include Fran, who had never met John, and his girls. The meal was lovely then John drove back too Richmond, a nice evening. 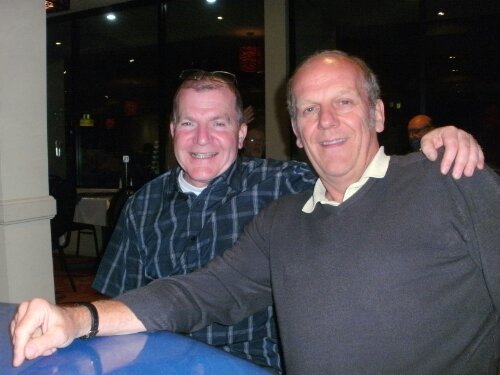 The next day and the day after we did the touristy bits around the ‘Three Sisters’, Echo Point, and the rest of the Blue Mountains. As I said I won’t be describing the full tourist descriptions of ‘scenes from a travelogue’. These can be got from Google or any library. As a taster here are some pictures: 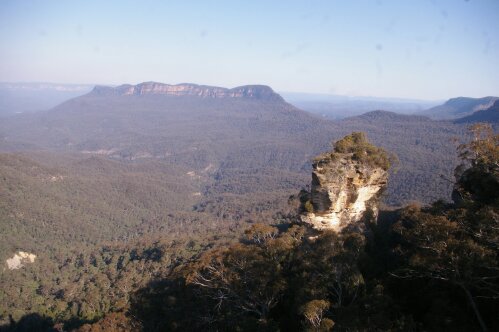 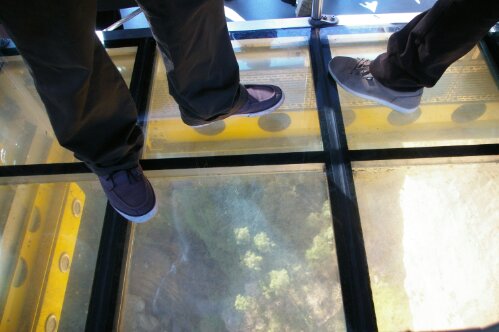 The last one is taken through the floor of the cable car which stretches across a valley. The glass turns clear after moving off from the station – spooky!

So, after some sight seeing, local historic places visited and meals out and in the kitchen, including a return visit to the RSL for our anniversary dinner, we departed on the Thursday morning, (this time with a cab!) on the train back to Sydney. When we arrived it was a simple transfer to a local train three stops down for the domestic airport and the flight back to Melbourne, all very smooth and easy. The only mistake was getting a bus from Melbourne airport in the centre of town, thinking we could easily get a tram back to Lygon Street; it wasn’t and we didn’t. We ended up walking about 2 miles ( or so it felt) dragging a suitcase, not to be repeated! Anyway we got back, that’s the main thing.

I thought it was only Melburnians who were polite and helpful; we encountered similar attributes where ever we went in New South Wales as well. For example teenagers give up their seats for older/less able people. Rubbish is not chucked everywhere. ‘Seniors’ are respected and are treated respectfully, there is a whole atmosphere of friendliness and ‘niceness’, a horrible word, I know but it fits the mood. Charity shops are called Op Shops (Opportunity) and are embraced. The clothes are always in very good condition (I bought a Rip Curl cotton shirt – an excellent well-known make for $6, about £3.50 and it’s immaculate and seems like brand-new). The streets are clean, there’s no gum on the pavements (or very little), and nearly all the shops are occupied and seem to be prosperous. There’s hardly any empty shops, multiple betting shops or rows of charity shops like there is in the UK. There’s an air of prosperity, although that may be short-lived when Australia’s mineral exports start slowing down. At the moment though, all seems good, with a change of government that may get even better, time will tell. I like Australian attitudes, the fact that shop assistants and serving staff can understand and speak English, and all are helpful in the extreme, as if its a pleasure to serve you, not an inconvenience like it is sometimes at home. It’s refreshing and its what Britain would have been like 30 years ago, but has now lost the olde worlde charm. I wish we could get it back. It seems to work here in Australia and they are still a modern, with-it nation. Some wish, it’ll never be like that in the UK.

1 Response to Sydney and the Blue Mountains Pt 2